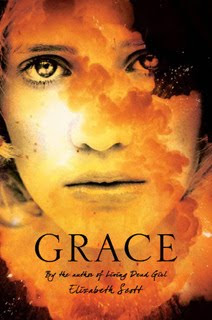 Grace was raised to be an Angel, a herald of death by suicide bomb. But she refuses to die for the cause, and now Grace is on the run, daring to dream of freedom. In search of a border she may never reach, she travels among malevolent soldiers on a decrepit train crawling through the desert. Accompanied by the mysterious Kerr, Grace struggles to be invisible, but the fear of discovery looms large as she recalls the history and events that delivered her uncertain fate.

I stepped out of my comfort zone again and chose a book with the dystopian theme.  I am not a big fan of this, but I thought I would give it a go.

I don’t know how to quite put into words how I feel about this book.  It had the good points, but it also had some bad points as well.  While I see Grace as a brave person who decides to choose her own path, I don’t like the idea of the women being weak basically and chosen to be used basically as suicide statements.  Since Grace was little, she knew she would be ordered to die. The One who is in charge has ordered it to benefit The People. I for one, hated this part of the story, but not because of the writing or the theme of it. I hated it more for the idea that it is decided by one person only who will die and who will live. No judge or jury decides, just one person.

Grace finds herself on the run choosing life instead of death.  She has decided to choose her own path and flee.  She meets up with Kerr, who is all about himself and no one else.  If Grace gets caught with him, he basically would throw her to the wolves so to say. Once I reached the middle of this book, I just couldn’t read much more.  Even though I wanted to know more about Kerr, and find out if Grace makes it, I just couldn’t bring myself to completely finish it.

The majority of the book that I read was so depressing and I just couldn’t bring myself to continue on in Grace’s journey.  This is not to say others will feel the same way. I just felt like this book was not going to have anything to look forward to at the end.  What I did read left me feeling sad yet thankful that we don’t live like this here right now.

One Response to “(ARC Review) Grace by Elizabeth Scott”