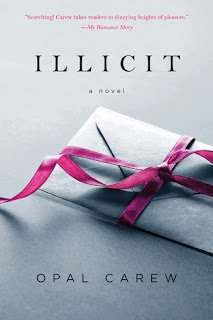 What began as a steamy weekend fling is about to change their lives forever.

When Lindsay receives a mysterious invitation to live out her most illicit fantasies, she thinks it’s her best friend playing a joke.  Little does she know, the invitation is from someone else.  Someone who knows her deepest desires…and intends to fulfill them.

Erik is a man of many secrets, and he intends to keep it that way.  When he invites Lindsay to his mansion, he thinks it’s just for a steamy weekend fling.  But from their first night together, there’s an inexplicably deep connection that shakes him to his core.  And with Lindsay in his arms, he feels both thrilled and unnerved.  As Lindsay brings his fantasies to life, he’s unwilling to let her go. But can he tell her how he knows her deepest desires, and will she stay with him if she learns the truth?

Usually author Opal Carew is a must read for me.  I love her writing and the fantasy worlds she can create within the covers of a book (and between the sheets for her characters).  With Illicit though, I was less than pleased with the story unfortunately.

The summary of this book sounded really good.  I was excited to start another book by this author and dying to see what she would bring for Lindsay and Erik.  The first few pages I was interested.  The few pages after that were okay. Then it went downhill and I just couldn’t finish it.  So needless to say, this review is a DNF but I will explain why I couldn’t read the rest.

Lindsay literally falls into Erik when entering the elevator.  She notices right off the bat how sexy Erik and his two friends are.  She has an entire fantasy about all three of them on this short elevator ride.  Okay, I will go with that. Who doesn’t have little fantasies in their heads when they are attracted to someone? They don’t interact and she quickly exits the elevator when she arrives to her floor.  She catches up with her friend Jill and she tells her all about the three sexy men she met in the elevator.  Jill states that she know who Conner and Travis are, but she doesn’t know who Erik is based on the descriptions Lindsay gives her. Jill tells Lindsay how she would love to set her up with them and she could have a quickie with them and fulfill a sexual fantasy.  Fine, I can handle this situation of girl gossip and bonding.

This is where the book started going downhill for me.  Days later, Lindsay receives an anonymous letter in the mail with just her name written on it.  It is an invitation for her to meet at a certain place so she can live out her sexual fantasies.  She assumes it is a joke from Jill wanting a girls night out and decides to go to this place without even asking if it came from her.  That right there didn’t make sense to me. We later find out that Erik is the one who sent her the invitation.  Moving on though.

Remember that they didn’t have much interaction in the elevator, but I also want to point out that Erik is already assuming things about Lindsay.  This is what Erik thinks just as Lindsay stepped out of the elevator:

“Damn, she was sexy as hell,” Conner said.
“True that, ” said Travis.
Erik nodded absently.  She was also sweet and a little shy.  Had low self-esteem.  And had a burning inferno of passion hidden deep inside.  And he would love to be the one to let it loose.  Along with Conner and Travis. –Erik, page 5

When she arrives at the hotel — and so do Conner and Travis shortly after — instead of hightailing it out of there when two strangers she doesn’t remember arrive, she decides to watch the two men go at it on the patio near the pool area.  If I had two strangers come into the suite, I would have hid until the coast was clear and ran like hell right away. When she does come to her senses, she runs out of the room straight to the elevator.  When the elevator doors open, she runs right into Erik — again!  Oh and he is still in his work uniform for work as a police officer.  This is where Erik really gave me the impression of being stuck up and “cocky”. (no pun intended)

Why would she come all the way here, then leave?
Then again, women weren’t always rational.  He’d learned that the hard way.  In the half dozen or so serious relationships he’d had, they’d all ended with the woman walking out.  Why? Because he knew them too well.  He satisfied them too well. –Erik, page 21