THIS POST IS INTENDED FOR READERS 18+
It is my extreme pleasure to have author J.P. Barnaby on the blog today.  Not only is she an amazing author, but she is also such an amazing person to chat with.  Seriously folks — this chick rocks! She was one of the first authors I started chatting with online when I first started my blog years ago.  She also is one of the first authors I read when venturing into the M/M genre of reading.  She has an amazing voice that translates to paper in such a way that you can’t help but love the stories.  So lets get started in celebrating with her at The Black Party Expo!
The Black Party Expo – Meeting CockyBoys 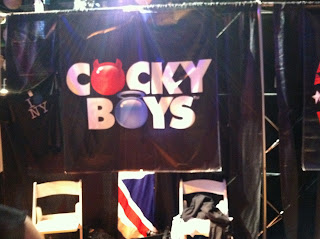 In March, Dreamspinner scheduled a conference for its authors around the Rainbow Book Fair in New York. It was an opportunity for the authors to meet other authors, editors, art department, and other staff (some of us, for the first time). It would be my second time in New York. I’d been there for about 24 hours in October for Hustlaball. Instead of thinking of MoMA or Wall Street or even the Status of Liberty for this trip, my first thought was Cockyboys. Cockyboys is a gay porn site with some of the most amazing models out there. So, I shot a tweet to @CockyBoys and @BennyMorecock to let them know that I’d be in the area and they told me about the Black Party Expo where they would have a booth. 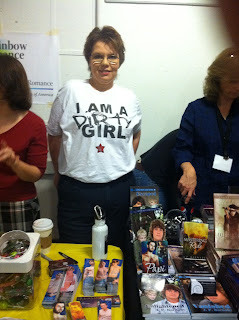 JP Barnaby signing books at the Rainbow Bookfair in NYC

The Rainbow Book Fair was amazing. After arriving in the stretch SUV limo that our publisher (Dreamspinner Press) provided to take us into the city, we found ourself on the first of  three floors of LGBT friendly people talking about art, music, books, and everything else under the sun. We were on the first floor in a room surrounded by other authors, publishers, and bloggers. We spilled across our assigned two tables, and into the Rainbow Romance writers on a third. We signed books, postcards, boomarks and other paraphernalia for our assembled fans. It wasn’t my first signing, but I was still nervous and Andrew Grey made me feel right at home. He kept us laughing all the way through the limo ride and into the fair. 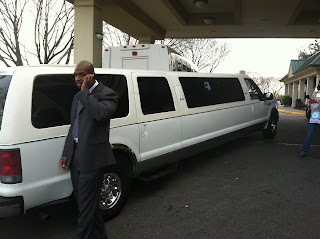 Riding to the book fair in style 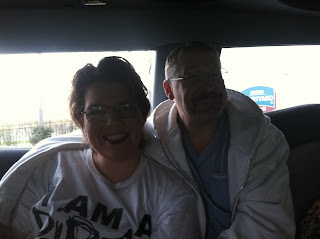 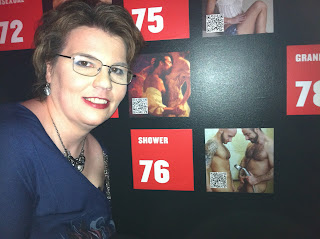 JP Barnaby at the Museum of sex with Drake Jaden… well, sort of

As I walked into the Black Party Expo, which reminded me a lot of IML, now that I’m thinking about it, I ran into Preston Steel whom I had met in San Diego. It surprised me that after just five minutes in a smoke-filled club, he would remember me, but he did. At the Lucas booth where Preston stood was a table with promotional cards for each model. On them, I saw Adrian Long whose name I recognized from Twitter. My friend @Eli_Wyn seemed to be quite enamored with him, so I got him an autograph. At that time, I also met Tate Ryder, who was a very sweet man. 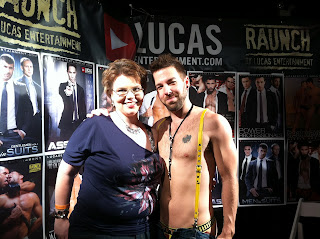 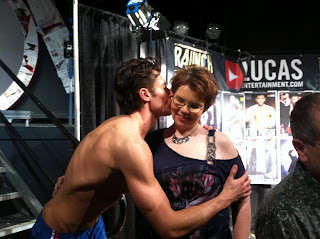 JP Barnaby with the gorgeous (and TALL) Adrian Long 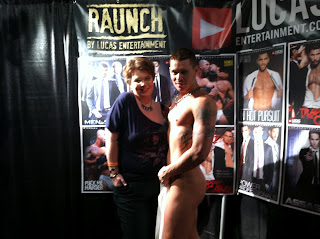 Then, I saw Kennedy Carter. 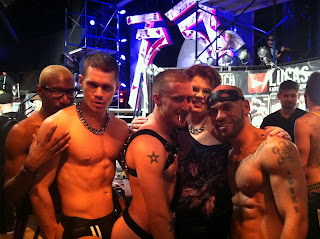 Kennedy and I had been texting about meeting up at Eastern Bloc later that night, but I saw him at the expo first with his beautiful boyfriend Ivan. We talked for a few minutes, and he led me over to the Cockyboys booth where I met Hugo Harley. I’d spoken to Hugo several times over twitter because enjoys the Little Boy Lost series. I also met the absolutely adorable Jake Bass who is every bit as sexy and sweet in person as he is online. One more person I got to meet with the Cockyboys booth was Nate – I’m not sure what he does for the site, but he was a very nice guy. 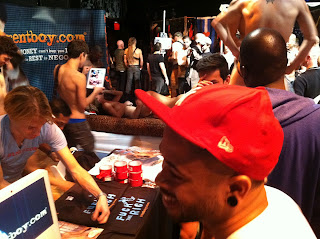 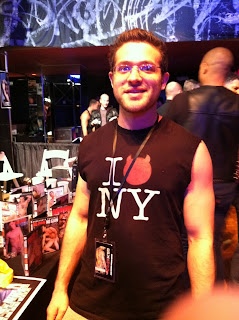 I won’t get into the “pie hole eating” contest that went on while we were there – you can certainly use your imagination to infer what went on. I can promise, it was exactly what it sounded like. I’d hate to try to get the…er…residue out later. But, I can say that the Rentboy booth entertained us greatly. They gave us each bondage tape, and someone was usually having sex. While we were there, they used the bondage tape to tie up this hot boy while two other guys fucked him. It was…liberating. 😉

Finally, it was time to go, so my friend I headed to the East Village, which is where Eastern Bloc is located. We had a fabulous light dinner at a tiny little place, whose name I don’t remember. After wards we went over to the bar. The décor was something out of communist Russia, a theme I hadn’t seen before in a gay bar. We waited a while, imbibing a little liquid courage for spending the evening with Kennedy Carter and his boyfriend. But, just as we finished our drinks, they came in. They talked with us for a little while before taking the stage. I have to say, I appreciated the loud atmosphere of the club because you really haven’t lived until Kennedy Carter is standing next to you, close enough to brush against you, and talking in your ear with that fuckhot accent. Oh my sweet Jesus. 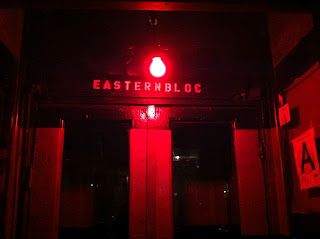 The evening ended with me on the pole with them – I’m not exactly sure how that happened. Maybe it was Ivan’s beautiful, ever-present smile, or Kennedy’s sexy-as-fuck smirk – but either way, I had a fabulous time with the ginger God, and his sweet and incredibly friendly boyfriend Ivan. If you ever get the chance to see them dance – grab it with both hands. 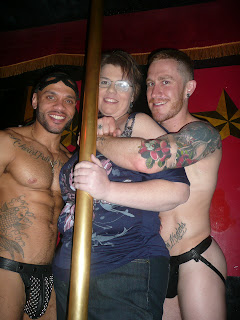 Ivan, JP Barnaby, & Kennedy Carter on the pole at Eastern Bloc
The Little Boy Lost blog tour continues June 25th – July 24th . Make sure to comment at each stop for more chances to win some really great prizes such as an entire series autographed to you by J. P. Barnaby. For additional entries – tweet about the tour including @JPBarnaby and #LittleBoyLost.
Tour Schedule: http://www.jpbarnaby.com/?p=637
UNTIL JULY 9th — Dreamspinner Press is offering Little Boy Lost: Enlightened (Book 1) as a FREE download. Books 2-5 are all 20% off. 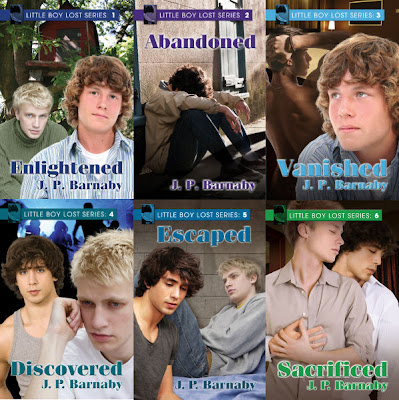 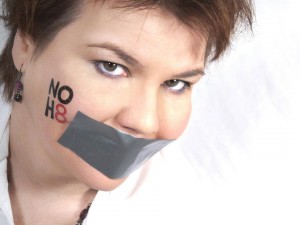 As a bisexual woman, J.P. is a proud member of the GLBT community both online and in her small town on the outskirts of Chicago. A member of Mensa, she is described as brilliant but troubled, sweet but introverted, and talented but deviant. She spends her days writing software and her nights writing erotica, which is, of course, far more interesting. The spare time that she carves out between her career and her novels is spent reading about the concept of love, which, like some of her characters, she has never quite figured out for herself.