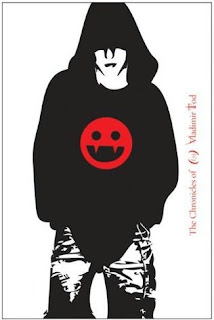 Vlad has to keep his vampire urges under control while dealing with the pressures of middle school.

When I first picked up this book at our local drug store, I thought maybe I would try a tween novel. Yes it says young adult, but the reaction I got from the back of the book made me think of the tween crowd. Boy, was I wrong. Another example of don’t judge a book by its BACK cover. This was a great young adult vampire read! Vlad was born half vampire and half human. The first of his kind. At first we see Vlad deal with normal 8th grade things such as homework, bullies, and first crushes. Then it gets exciting when the new teacher on campus gets suspicious of him. The ending left you with a twist that you don’t see coming, which was great! It leaves you wanting to rush out and get the rest in this series to see what happens when Vlad starts high school. Another new author for me to add to my fave list!

4 Responses to “8th Grade bites: The Chronicles of Vladimir Tod – by Heather Brewer”