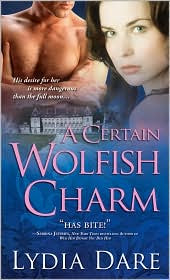 In Lydia dare’s debut trilogy, Regency England has gone to the wolves!
He gets crankier and crankier as the moon gets full…
The rules of Society can be beastly-especially when you’re a werewolf and it’s that irritating time of the month. Simon Westfield, the Duke of Blackmoor, is rich, powerful, and sinfully handsome, and has spent his entire life creating scandal and mayhem. It doesn’t help his wolfish temper at all that Miss Lily Rutledge seems not the least bit afraid of him, and in fact, may be as untamable as he is…
A woman whose charm is stronger than the moon…
When Lily’s beloved nephew’s behavior becomes inexplicably wild, she turns to Simon, the boy’s cousin and guardian, for help. But Simon’s idea of assistance is far different than hers, and Lily finds herself ensconced in his house and engaged to the rogue.
They both may have bitten off more than they can chew when each begins to discover the other’s darkest secrets…
MY THOUGHTS:
This was a great book for a first in the series.  I really enjoyed each of the characters and their personalities.  Lily was strong and determined, which she needed to be when dealing with Simon.  He was stubborn and a spit fire with everything rubbing him the wrong way.  You can’t even help laughing when all the characters are fighting with each other.
The writing was great and the dialogue flowed nicely.  I devoured this book from beginning to end, and I was still hungry for more of the series!  A great book to sink your teeth into!
MY RATING:

Outstanding Book That Will Stay On My Bookshelf
For Rereading!
UPCOMING BOOKS IN THE SERIES:

3 Responses to “A CERTAIN WOLFISH CHARM by Lydia Dare”