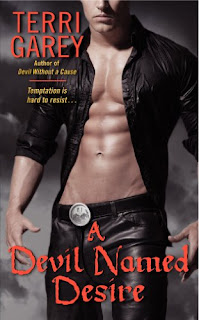 Forbidden fruit is always the sweetest…


…and no one knows that better than Sammy Divine, High Prince of Darkness. Once an angel, now cast down, Sammy’s out to prove he’s not the only angel who can be led into temptation…


Hope Henderson’s sister has disappeared without a trace, and Hope will do anything to find her–even make a deal with the Devil. An ancient text holds the key to unspeakable power, and it’s the Archangel Gabriel’s job to make sure it stays hidden, even if he has to become human to do it. Lives, love and the fate of the world hang in the balance, as Hope and Gabriel learn that when passion’s involved, it may be impossible to withstand a devil named desire.

Oh Sammy Divine, finally we meet again.  First of all can we all take a look at that fine looking man on that cover?  Okay, now that we have drooled and hoped that those pants would slip a little further down, lets get down to the details of the book.

It seems like I have waited forever to read more about Sammy Divine — or The Devil — and the bargains he would be making with the next unfortunate soul on Earth.  This time not only is he going to be tormenting a human soul on Earth, but he is going to throw in his ‘brother’ Gabriel as well. Gabriel is always trying to convince Sammy that there is hope for him at redemption.  Sammy doesn’t believe it and decides to teach Gabe a lesson.  So Sammy convinces Hope to become a pawn in his game by striking a ‘bargain’ with her.  He blackmails her at her lowest point in life — at the suicidal point — and tells her he will give her what she wants in the form of her missing sister if she will translate a book of spells to open the doors to Hell on Earth.  She agrees to the bargain and Gabe is thrown into the mix when he realizes she is being followed by evil.  As an angel of the Heavens, he becomes her Guardian and swears to protect her.  Together they try to find her sister and find a way out of the deal with Sammy.

I really enjoyed this latest installment in the series.  The only problem I had with it was the fact that it was suppose to be about Gabriel and Hope but  instead it seemed that Sammy had more page time than them.  Don’t get me wrong, I loved what little time we got to read about Gabe and Hope, but Sammy seemed to be the bigger focus this time around.  As you get closer to the end though, you start to realize why Sammy was such the dominant character in this book.  Instead of Sammy teaching Gabe a lesson, it seems the the Higher One is actually teaching Sammy a lesson and pointing him on the true path of redemption.

I am looking forward to the next book in the series and I hope we get to read even more of Sammy and his bargains.  I do hope that when the series continues to progress, Sammy will get his own book and hopefully love with a happily ever after.  You never know, maybe the Devil can even have the coveted true love and happy life.

Very Good! I would recommend this book!
* I received this book free of charge in exchange for an honest review*