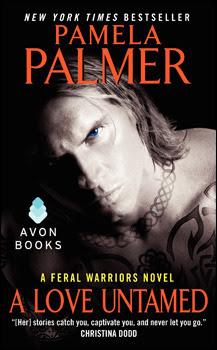 The newest member of the elite Feral Warriors brotherhood, Fox is eager to prove himself on the frontlines of battle against the Daemons. When paired with the legendary Ilina warrior, Melisande, he expects the fierce beauty to quickly fall under the spell of his quite considerable charm. Instead, he finds himself spellbound by a woman who’s his match in every way.

Beneath Melisande’s brittle exterior lies centuries of pain and a violent hatred of all shape-shifters—a hatred that slowly crumbles after they’re caught in a deadly and cunning Mage trap and she glimpses a surprising depth in her far-too-seductive partner. Their survival demands unconditional trust—and their salvation surrender to a wild, untamed love.

After the way the last book in the series ended, I had been stalking the sites waiting for my chance to pounce on the next book in advance.  When it became available for review, my fingers clicked faster than the eye could see.  Yes everyone, I was that anxious to read the next book in the Feral Warrior world.

We start the story eight days before the story ended in the last one.  Kieran is training new recruits into the Therian Guard.  It is then that he becomes marked as a new Feral Warrior along with one other.  From this point we also get to flash forward slowly up until the point of what actually happened those last few moments in book six.  We see who kidnapped Kara — their Radiant and Lyon’s mate — and how it all went down.

I always had a soft spot for Fox even when it was the previous one.  I missed the Cub, but when Kieran was marked as his replacement I decided to give him a chance.  He still had the playfulness of the previous Fox, but he was also a born warrior.  There was no mistaking the good that is in him.  Melisande was never a favorite character of mine.  She was without emotion and just to hard for my taste.  Even though I wasn’t a fan of her,  I tried to embrace her personality and give her a chance.  What we learn of her past though is actually what made her the cold and vicious warrior that she is today.  Only Fox is the one who has touched her tender side and he is the only one who can bring it out.  Mel is aware from the get go that he is her destined mate but she refuses to accept it.  She wants to stay cold and unfeeling without having to accept a Feral Warrior as her mate.  She has despised them for so long, she is afraid to even let one close enough to see her weakness.

The two become trapped in a Mage Labyrinth with no way out that they can find.  This where the story started to fall for me.  I enjoyed the small connections between the two characters and understand that this is their book, but I wanted the other Feral’s included more.  Each book the author has had before this one has had a balance of main characters and side characters.  The reader received enough of each to stay satisfied.  With Love Untamed,  we are only given small glimpse’s of the rest of the Warrior’s and it didn’t satisfy me as a fan of the series.  We were given small pieces of further story but not enough to get the reader as excited as before.  There are still some questions unanswered.  This fine since it is a series, but too many can lead to the reader becoming to frustrated to continue in the journey.

The rescue of Kara was also rushed and too easy.  I expected it to be much more with all Feral Warrior’s included in the rescue.  Instead they only appear near the end of the rescue.  If they are rescuing Kara from the evil Mage’s main stronghold, you would think it would have been a little harder than what it was.

Overall I was glad to have read this one early.  I am left guessing of what will come in the next one even if I felt a little cheated with it.  Not one of my favorites of the series like I was hoping, but one very worth the time and money especially if you are a huge fan of the series.  Now the only problem is waiting even longer for the next one to arrive!

Okay book, but it left me wanting more!
PREORDER FROM AMAZON
*I received this book free of charge in exchange for an honest review*