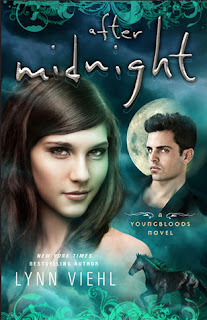 AFTER MIDNIGHT
A Youngblood Novel
Author: Lynn Viehl
Source: Publisher
*I received this book free of charge in exchange for an honest review*

Sophomore Catlyn Youngblood is used to the nomadic existence she and her two older brothers have shared since the death of their parents. When they settle down for good in the sleepy backwoods town of Lost Lake, Florida, Cat thinks they might finally fit in. Instead, they’re shunned by the locals.

While riding her horse late one night, Cat meets an enigmatic and handsome boy named Jesse Raven. Even more strange than her overpowering attraction to him is Jesse’s apparent aversion to the sun. As their attraction intensifies, long-kept secrets come to light. Cat learns that the Ravens are a centuries-old vampire clan . . . and worse still, that she and her brothers are descendents of Abraham Van Helsing, the world-famous vampire hunter. Mortal enemies by blood, the two families do all they can to keep them apart. But Cat and Jesse will risk everything to be together—including death.

I don’t even know where to begin with this review since it was a book that I was really looking forward to.  While it was one I was excited to receive, it fell flat while reading the story.

After the death of her parents, Catlyn has been living with her oldest brother Patrick and middle brother Grayson.  While Catlyn is trying to adjust to another move and yet another school,  Patrick announces that they are finally going to settle down in one place and stay in Lost Lake, Florida.  Catlyn tries to make the best of it, but she still feels like an outsider after the way she is treated by the people in town.  When she decides to take a night ride on her horse Sali, she literally crashes into Jesse Raven, who just happens to be the mysterious boy who lives on an island in seclusion.

I felt the author did a great job at setting up the story in the beginning.  It was paced nicely, but as soon as Jesse entered the storyline, the author rushed everything and at times leaves the reader confused.  There were many times in the book that I wanted to stop reading the story even if I wanted to know what happens at the end.  The romance was forced between Catlyn and Jesse, the secrets were not so secret at times, and the revelations that are revealed near the end are predictable and cliche.  It seemed like the story had no outline and was just a jumble of thoughts and ideas rushed into a book.  This could have been an amazing story if the author would have paced the story like the first few chapters instead of forcing the plot in a rush.  I never could connect with any of the characters in the story.  There wasn’t much chemistry between Jesse and Catlyn, and what was there was too rushed.

Would I read the next book in the series?  Yes, but only if the author can sit down and time the plot better.  I am looking forward to see what the author will create for Grayson and Patrick, who in my opinion, were more exciting than Catlyn and Jesse.  For that fact alone, I am willing to find out what their stories will bring.