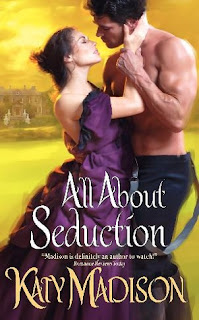 ALL ABOUT SEDUCTION
Author: Katy Madison
Source: Publisher
*I received this book free of charge in exchange for an honest review*

Caroline Broadhurst is about to take a lover — at her husband’s command. For fifteen years, Caroline has done everything her much older husband has desired — except provide an heir. Now he has given her an ultimatum: seduce a suitable gentleman and bear a son. Caroline would never think of bowing to such a shameful order, but then she meets Jack Applegate.

Jack has longed for the beautiful, untouchable Caroline for years, but the chasm between them was too wide to ever dream of crossing. Now, fate and passion have thrown them together, but the potential scandal threatens to smother their love. And when a violent secret comes to light, only a terrible sacrifice will prevent the flame of their affection from being snuffed out forever. . .


When Caroline is summoned to her husbands office one day, she never expected to hear the proposal he brought to the table.  He wants a child –which Caroline also desperately wants — but he is sterile.  After fifteen years of marriage, Caroline thought it was her unable to conceive a child.  What he proposes is for her to sleep with men of his choosing that is brought to their home and have one of them father the child.  Caroline was very young when she married her much older husband.  She has never enjoyed sex and can’t stand the act of it.  Her husband has always been rough and uncaring when it comes to lovemaking.  Even with these feelings towards sex, she still has been a proper wife and never had affairs or improper acts with anyone else. The only way she will receive any money if her husband passes away is if she provides him with an heir.


Let me start with the things I did not like about this book so we can get them out of the way.  First her husband is way older than her — considering he is as old as a grandfather would be.  Two, what kind of husband would make you sleep with other men –strangers no less– just to provide a baby instead of adopting? Three, I hate how he made her do this, but then he got enraged when he suspects she actually did it! I understand this is a historical romance and things were done differently in those times, but the whole story was a little far fetched for me.


Now lets touch on the good things about the book for me.  I absolutely fell in head over heels for Jack.  He was sweet, patient and tender which every woman would love to have in a man.  He has always admired Caroline from afar, but since he was only a mill worker at her husbands mill, he knew he was not even close to the same class she was in.  All Jack wants in life is a woman to love, a way to further his life financially to where he can provide for a family of his own, and a chance to be happy.  When he crushes his ankle on a piece of mill equipment though, he knows his life is going to change for the worse.  No one will want a cripple working for them and he will have to give up his dreams of being an inventor in London.  He was protective of Caroline, but held back enough to know when to step in and when not to.  He always pushed her to open up to him about her problems and to let him in.


So, everything balanced out for me in this book which left me with just a mediocre feeling about the book.  I liked the characters of Caroline and Jack, but there were characters I despised just as much.  The ending was wrapped up way too quickly and I felt it needed to stretch out further than just a few pages.  I wills till read more by the author and I can’t wait to see what other type of historical scandal she can bring to the table next, but I won’t go as far to say as it was my favorite historical romance this year.