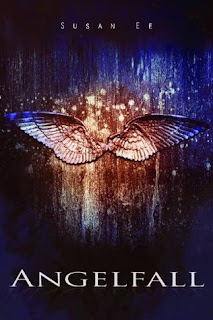 It’s been six weeks since angels of the apocalypse descended to demolish the modern world. Street gangs rule the day while fear and superstition rule the night. When warrior angels fly away with a helpless little girl, her seventeen-year-old sister Penryn will do anything to get her back.


Anything, including making a deal with an enemy angel.


Raffe is a warrior who lies broken and wingless on the street. After eons of fighting his own battles, he finds himself being rescued from a desperate situation by a half-starved teenage girl.


Traveling through a dark and twisted Northern California, they have only each other to rely on for survival. Together, they journey toward the angels’ stronghold in San Francisco where she’ll risk everything to rescue her sister and he’ll put himself at the mercy of his greatest enemies for the chance to be made whole again.

Holy crap!  Why have I not heard of this book before now?  I must have been asleep under some rock! When I first received this book, I put it in my review pile and forgot about it until it was at the top of the stack.  I thought to myself that it was just going to be another book about angels saving the day and it would probably end up being a slow read for me.  I was so very wrong!

The action in this book practically starts from the first chapter.  It doesn’t let up hardly at all and the world is not what we thought it would be when Angels arrive.  When we think of Angels, we think of Heavenly beings coming to rescue the innocent and being all around good guys.  What the author creates in Angelfall is so much more than that but different as well.  It is so hard to describe the world and the Angels without giving away key points in the story.

I will give you a quote from the book involving Raffe the Angel:

“My friends call me Wrath,” says Raffe.  “My enemies call me Please Have Mercy.”
page 100

Yep that basically sums up Raffe in a nutshell with the power he has.  But — and this is a big but — don’t let that quote make you think he isn’t compassionate or without emotions of love.

The slow build of friendship and possibly love is written wonderfully between Raffe and Penryn.  You can just feel the tension between the two on every page.

My only complaint for this book would be — WHY IS IT TAKING SO LONG FOR THE NEXT BOOK?

This book was a roller coaster ride of emotions, action, and at times frustration!  When I finished the last page I seriously wanted to start the whole book again just because I needed my Raffe fix again.  If author, Susan Ee happens to read this review — Bring me more Raffe soon!!!