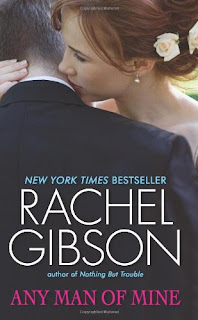 ANY MAN OF MINE
Author: Rachel Gibson
Source: Publisher
*I received this book free of charge in exchange for an honest review*

What happens in Vegas . . . doesn’t always stay there.

Autumn Haven’s Las Vegas “to-do” list said to catch a show and play the slots—not wake up married to a sexy jerk like Sam LeClaire. The first moment she saw him eyeing her like a luscious piece of the dessert buffet, her usually responsible self told her to run. And she did—right into the wildest fantasy weekend of her life. But Monday morning jolted her back to reality, and before she could say “pass the coffee,” Sam was gone.

Now a successful wedding planner, Autumn hasn’t clapped eyes on the heartbreaking hockey superstar for over two years . . . until she organizes his teammate’s “Special Day,” where Sam makes a big play to pick up where he left off! But she has vowed any man of hers plays for keeps. Is Sam the man for her or does she banish him to the sin bin forever?

I haven’t read any books by author Rachel Gibson even though I do own many of her books.  So when the publisher sent me Any Man of Mine, I really didn’t know what to expect with the writing by this author.  I was also worried since it is book six in a series, but I dove into the story anyway in hopes of not needing to read the previous books.

While it wasn’t the best romance I have read, it certainly wasn’t a disappoint me either.  I liked the writing style and the fun characters that the author created.  Even though Sam was a little full of himself at times and could be well deserving of a smack upside his head, I thought that Autumn handled him well enough and could feel a spark between the two.  I like how Sam slowly warmed up to the idea of taking over his role of Father to their child even if he was a little late in getting there.  Then after reading a few chapters, I noticed that the little opening at each chapter was a glimpse into what the character was suppose to learn in each of those chapters.

Even though this is book six in the Chinooks Hockey Team Series, I didn’t feel lost or confused like you would normally feel when coming into a series late.  I felt it held its own as a stand alone and it captured my interest in reading more of this authors work.  Why did it take me so long to realize that I need to read more of this author?  Thank goodness I already own more of her work because now I am hooked on her writing.  Since I don’t have prior reading experience of her other works, I can’t say if this is better or worse than previous novels.  All I can say is that I am desperately wanting to find the time to read more of her work!