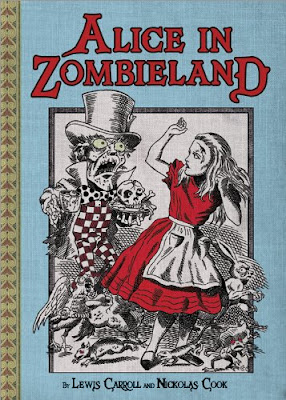 “They were indeed a queer-looking party that assembled on the bank-the birds with draggled feathers, the animals with their fur clinging close to them, and all dripping wet, cross, and uncomfortable. All of them were covered in Alice’s now cold and congealed blood, which made them even tastier looking to poor hungry Alice.”

When little Alice follows the Black Rat down into the gaping darkness of an open grave, she falls and falls. And soon finds herself in an undead nightmare of rotting flesh and insanity. Venturing further into this land of zombies and monsters, she encounters characters both creepy and madcap along the way. But there’s something else troubling poor Alice: her skin is rotting and her hair is falling out. She’s cold. And she has the haunting feeling that if she remains in Zombieland any longer, she might never leave
.
Can Alice escape Zombieland before the Dead Red Queen catches up to her?

When asked to review this book, I was a little hesitant in accepting.  I liked Alice in Wonderland as a child, and I wasn’t too sure I wanted to see what changes would be made to this classic story.  I was curious though after reading some Austen remakes that are being retold the same way.  So I fell through the rabbit hole and began the journey with Alice.

After only a few pages of the book, I knew this was going to be hard to get through.  The writing wasn’t favorable in the fact that it had a ton of run on sentences that began to be annoying.  I kept wanting to grab a pencil and start editing.  While it followed the story of the classic at times, some of it became horrendous.  I actually rolled my eyes in several parts and put it down during some of it to take a break.  I had to force myself to finish this book.

Some stories should be left to the original version.  In this case, I want to throw this book in the hole and not welcome it back.  If you are a fan of fairy tale’s being retold, and don’t mind the darker side of it, I would recommend borrowing this book from the library first before purchasing it.  You might find yourself wishing to save your money for a different fairy tale remake.