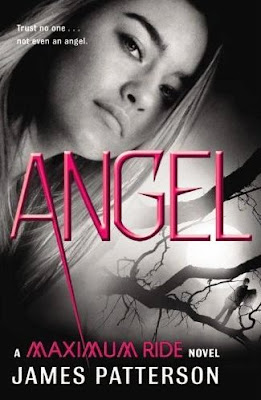 ANGEL
A Maximum Ride Novel #7
Author: James Patterson
Source: Publisher
* I received this book free of charge in exchange for an honest review*

In the seventh book in the bestselling series, evil scientists are still trying to convince Max that she needs to save the world, this time by providing the genetic link in speeding up the pace of evolution. Worse, they’re trying to convince her that her perfect mate is Dylan, the newest addition to the flock. The problem is that, despite herself, Max is starting to believe it.

Fang travels the country collecting his own gang of evolved humans, but the two separate flocks must unite to defeat a frightening doomsday cult whose motto is Save the Planet: Kill the Humans. And this time, the true heroine, for once, might just be little Angel.

If you are a fan of the Maximum Ride novels by James Patterson, then I can assume you have been like me in the hopes that the release of this book would hurry and get here.  I stalked the authors web page, Goodreads, Amazon and the publishers website in anticipation of hearing anything about the release date, cover and summary for this book.  After the last book, titled Fang, I was left with tears and in a serious need of the next installment to help get me over the ending of the book..  I needed to know what would happen next.

When I received this ARC copy in the mail, I was over the moon! I couldn’t help putting it as the next book in line for me to read.  That is how much I have enjoyed this series in the past.  I finished my household chores and tucked the kids into bed.  Then I stayed up late reading this book.  Yet after the first couple of chapters, I realized my anticipation for the novel was sliding downhill.

While I enjoy all of the characters in The Maximum Ride Series, Fang and Max have always been my favorites.  I was cheering for the two of them to become a couple even if they were young.  I wanted them to have that relationship more than anything.  They had earned it and they needed some happiness.  After reading Fang, I was still hoping that the happiness would return.  Yes, we get to see Fang in this book, but not in the way we are all hoping  for.  He is still trying to gather his own flock and Max is still trying to deal with the fallout of Fang not being a part of hers.

While the story stays true to the non-stop action, with climatic short chapters as in the previous books, the plot of this one was not as well executed as it should have been.  I felt the author used this book as a “filler” book for the story.  It felt like he was rushed and needed to put this book out there to keep the fans satisfied until the final book in the series is released in 2012.  It didn’t seem that story had much progression to it to warrant it as a “next in the series” book.

Overall, I expected so much more out of this. More angst, romance, adventure and actual plot.  I wish the author could have brought us so much more to enjoy the ride of the series.  Instead I felt the author let us down with this installment.  Will I read the final book in the series that will be released in 2012? Yes. For one I want to finish the series that I have loved, but I also want to know if the author is saving the best for last!