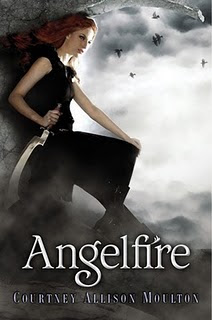 ANGELFIRE
Author: Courtney Allison Moulton
Source: Around The World Tours
SYNOPSIS:
When seventeen-year-old Ellie starts seeing reapers – monstrous creatures who devour humans and send their souls to Hell – she finds herself on the front lines of a supernatural war between archangels and the Fallen and faced with the possible destruction of her soul.

A mysterious boy named Will reveals she is the reincarnation of an ancient warrior, the only one capable of wielding swords of angelfire to fight the reapers, and he is an immortal sworn to protect her in battle. Now that Ellie’s powers have been awakened, a powerful reaper called Bastian has come forward to challenge her. He has employed a fierce assassin to eliminate her – an assassin who has already killed her once.

While balancing her dwindling social life and reaper-hunting duties, she and Will discover Bastian is searching for a dormant creature believed to be a true soul reaper. Bastian plans to use this weapon to ignite the End of Days and to destroy Ellie’s soul, ending her rebirth cycle forever. Now, she must face an army of Bastian’s most frightening reapers, prevent the soul reaper from consuming her soul, and uncover the secrets of her past lives – including truths that may be too frightening to remember.

MY THOUGHTS:
This is one of those novels that readers are coveting to own way before the release date is even in sight.  After seeing people talk about this book, chatting online with the author, and reading the blurb about it, I joined this group of people waiting not-so-patiently for the release date to arrive.  Even though the book doesn’t release until Feb. 2011, I was lucky enough to join a book tour for this one. I am so glad I was picked for this one.
In this first installment of a trilogy by author Courtney Allison Moulton, the author does not disappoint with action packed chapters, wisecracking characters, and grim reapers to boot.  Each of the characters bring a certain element to the book that will draw you in from page one, and leave you wanting more by the end of the last page.
Ellie is the friend you would want in this author’s world.  She is strong, funny and kicks butt with flair.  She doesn’t think she is brave and able to face the battles that are presented to her, but she gives it all shes got.  In the process she can throw out the witty remarks to even out the serious scenes.  Will is the opposite of Ellie in my eyes.  He is serious, determined and protective of Ellie.  Even though Will has the brooding and intense looks down pat, he still will keep you captivated like he did with Ellie.
With all of the serious battles and struggles, the characters are still teens with the usual teen problems.  The romance was beautiful yet the awkwardness of teen relationships is wonderfully brought out in the writing as well.  The side characters were just as amazing as the main characters and kept you moving at a great pace.
This is an amazing debut to a wonderful trilogy that I cannot wait to continue.  This is one of those books that if you haven’t already heard the hype about it, stand back!  Be prepared to have your own Will on the sidelines to come rescue you on release day, because you will be fighting your own battle to get this great book before anyone else!
MY RATING: