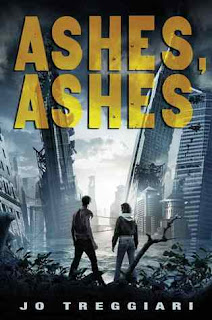 ASHES, ASHES
Author: Jo Treggiari
Source: Publisher
*I received this ARC free of charge in exchange for an honest review*

Epidemics, floods, droughts–for sixteen-year-old Lucy, the end of the world came and went, taking 99% of the population with it. As the weather continues to rage out of control, and Sweepers clean the streets of plague victims, Lucy survives alone in the wilds of Central Park. But when she’s rescued from a pack of hunting dogs by a mysterious boy named Aidan, she reluctantly realizes she can’t continue on her own. She joins his band of survivors, yet, a new danger awaits her: the Sweepers are looking for her. There’s something special about Lucy, and they will stop at nothing to have her.

With all of the Dystopia books that are being released lately, I wasn’t surprised to find another one in my review pile.  I actually put this one behind a few others just so I could get a break from these for a bit.  So when I started reading it, I came at it fresh and ready to jump into the end of the world story.


Ashes, Ashes was not one of my favorite Dystopia books.  I wanted so much more from it.  While I liked the character of Lucy and her strong self of independence, I felt the romance between Lucy and Aidan was less than thrilling.  I never could really figure out Aidan’s role with some of the other characters.  While I enjoyed the premise of Sweepers and such, I didn’t feel there was enough action and drama to warrant the 341 pages in ARC format.  Some of the scenes were repetitive and some of the characters were confusing.  The character of Grammalie Rose was left unfinished in not knowing if she has secrets that need to be revealed or if she is just grouchy at times.  Del was a nuisance and I couldn’t figure out her interest in Aidan and Sammy.  While it is explained a little bit, I wanted a little bit more back story to warrant her affections for them.  Henry was fun and flirty.  I felt Lucy could have had a better chance with him than with Aidan.


The ending was not one I was really a fan of either.  There were still some things left unanswered.  Plus it didn’t feel believable. Without giving away a spoiler, it is hard to write the one thing that could have made the ending better and believable for a follow-up book if one is planned.  THE VIAL! Why does she do what she does with it? Why not hand it to the one person in the camp that can use it? Plus, the book is heavy on narration and not enough dialogue between the characters to keep you engaged in the plot.


Overall, this was just a decent read with many flaws that need to be worked out.  Not one I would reread again, but I might pick up the sequel if there plans to be one just to see if some things plan to be answered further.