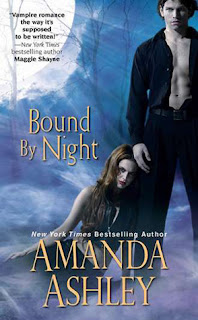 BOUND BY NIGHT
Author: Amanda Ashley
Source: Author Submission
*I received this book free of charge in exchange for an honest review*

A VAMPIRE’S KISS IS FOREVER…

Once featured in a horror movie, the crumbling Wolfram estate is said to be haunted by ghosts, witches, and worse. But Elena doesn’t believe a word of it—until she spends the night and wakes up in the arms of a compelling stranger…

Tall, dark, and disturbingly handsome, Drake is the most beautiful man Elena has ever seen. For centuries, he has lived alone, and Elena is the first woman to enter his lair—and survive. And Drake is the first man to touch her heart and soul. By the time she discovers who he really is—and what he craves—it’s too late. Blood lust has turned to love, and Elena is deeply under Drake’s spell. But forever comes at a price for each of them.


Author Amanda Ashley has done it again.  She has swept me back into the world of Vampire Romance in its true form. She takes the root of Vampire Paranormal Romance and puts it into a story to captivate the reader.


I loved the characters of Drake and Elena.  While Elena was pure and innocent, Drake was her balance in danger and mystery.  After living with her drunk Uncle, Elena flees to the castle called Wolfram Estate on the hill.  She has heard numerous stories of it being haunted and abandoned, but she feels she has no choice to hide away in the castle and leave the abuse of her Uncle.  She discovers that the house indeed has someone living there and he is the most gorgeous man she has ever seen.


Drake has lived for a long time and humans barely interest him anymore except for nourishment.  Yet when he sees the lovely Elena at his castle, he is intrigued by her.  He develops feelings for her that he has never felt before.  Even though he is suppose to marry another woman to secure his rightful place in the Vampire Royalty, he has no desire to be with anyone but Elena. Together they share a love that is deep and true even if there is danger to come.


Both characters were great in Bound By Night.  I loved how Drake treated Elena like a princess and cared for her well being over his own.  Elena handled the supernatural better than most people would have.  Her courage was just as great as Drakes, but in her own way.


Again, Amanda Ashley has delivered an amazing paranormal romance that will quench your thirst of vampire lore!  I can’t wait to see what happens in the next book which is suppose to be based on a character you will discover in this book!