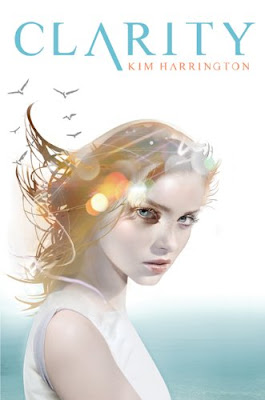 CLARITY
Author: Kim Harrington
Source: Publisher
*I received this ARC free of charge in exchange for an honest review*


When you can see things others can’t, where do you look for the truth?

This paranormal murder mystery will have teens reading on the edge of their seats.

Clarity “Clare” Fern sees things. Things no one else can see. Things like stolen kisses and long-buried secrets. All she has to do is touch a certain object, and the visions come to her. It’s a gift.

When a teenage girl is found murdered, Clare’s ex-boyfriend wants her to help solve the case–but Clare is still furious at the cheating jerk. Then Clare’s brother–who has supernatural gifts of his own–becomes the prime suspect, and Clare can no longer look away. Teaming up with Gabriel, the smoldering son of the new detective, Clare must venture into the depths of fear, revenge, and lust in order to track the killer. But will her sight fail her just when she needs it most?

Every now and again, an author brings to the table a paranormal book that is not only beauty on the outside, but wonderfully written on the inside.  With Clarity, I was sucked in from the first page and couldn’t put it down until the end.

Clarity comes from a family who have special gifts.  The whole town she was originally from had gifts as well.  Clarity can see past events from touching objects.  Her brother Perry can see the dead spirits.  Her mother is a telepath and can read the immediate thoughts of others.  Together they run a home based business for tourists in their town on Cape Cod.  When a tourist is found murdered at the local hotel, Clarity teams up with Gabriel who happens to be the newest Detective’s son.  To make it more complicated though, he ex-boyfriend is included in the investigation as well. When clues and suspicion is suddenly on Perry, Clarity makes it her number one priority to find the real killer.

I really liked Clarity.  She had strong feelings supporting her family and proving her brother innocent no matter what was thrown at her.  Yes, she had doubts at some point, but she quickly got over them and believed in her brother.  When other people started dying, she refused to back away from the case and continued to try and find out just who the murderer was.

Gabriel was the bad boy on the outside, but the heart of a good guy that balanced with Clarity perfectly.  Even though her ex-boyfriend Justin came off as the typical cheat at first, but once you delve in deeper to his character you will find a hard time choosing between Gabriel and Justin.

The only problem I really had with this book was the clues.  We barely had any clues to go by in figuring out who it could be.  It was like we were actually learning as Clarity was.  Sometimes this can be a good thing if written well.  I think it hindered this book though, because near the end, all of the clues surface just as the killer is revealed.  I wanted more clues to keep me guessing throughout the entire book instead of just the end.

Overall though this was a great read that enjoyed.  I read it fairly quickly and held my interest for the whole book.  I do hope the author plans to write a sequel to it and have a story branched off for Perry as well.  I would like to see him have his own book.