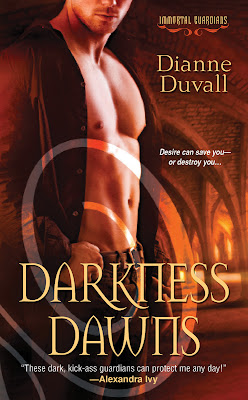 Once, Sarah Bingham’s biggest challenge was making her students pay attention in class. Now, after rescuing a wounded stranger, she’s handed in the middle of a battle between corrupt vampires and powerful immortals who also need blood to survive. Roland Warbrook is the most compelling man Sarah has ever laid hands on. But his desire for her is mingled with a hunger he can barely control…In his nine centuries of immortal existence, no woman has tempted Roland as much as Sarah. But asking her to love him is impossible – when it means forfeiting the world she’s always known, and the life he would do anything to protect.

When I first saw this book on the authors blog, I was instantly intrigued by the summary and cover.  This is the first book in a series by author Dianne Duvall.

When I first started reading the book, I figured we would get a history lesson first on what the book was going to be about.  To my surprise, the author starts the book out with a bang! The action literally starts in the first chapter and continues through out the rest of the story.  I love how the two main characters meet in the middle of the action and take off from there.

Sarah was independent and fun, and she complimented Roland well.  Roland is more of quiet person who likes to keep to himself.  Of course, being a 900+ year old Immortal Guardian would make anyone want to keep to themselves.  I felt the connection between the two early on in the book.  They both seemed to fit together and balance each other out.  While I am still skeptical about the rushed romance between the two, I did enjoy it.

The side characters and their stories was also nice. Seth, the eldest Immortal, was strong and respected, yet came off as a good friend.  He has his own side adventure in the book that will be a great plot base for future books in the series.  I just wish that the author would have explained just a bit more about his story instead of leaving so many unanswered questions. Still it will be great to see what the revelation in that story will be!

Marcus was a laugh out loud a minute character.  I found myself enjoying him even more than the main characters.  He was a friend you would love to have on your side for the good and the bad days!

“You still aren’t screaming.”
“Is that the usual reaction you get when people realize you’re, um…”
“Different? Yes, generally.”
Marcus stepped up beside him. “We also get shrieks, curses, pant wetting, bowels releasing”–Sarah grimaced–“religious recitations…”
Her eyebrows rose. “Religious recitations?”
“You know–Get thee back, you, ah…” He nudged Roland. “What was it that priest called us?”
Roland rolled his eyes. “Which one?”
“The one in London.”
“What century?”
“Eighteenth.”
Sarah’s mouth fell open.
“The one with hair like Albert Einstein?”
“Yes.”
“Spawns of Satan.”
“Right.” Adopting a raspy elderly man’s voice, Marcus shook his fist at Sarah and intoned dramatically, “Get thee back, ye spawns of Satan. Return thee to the bowels of hell where ye belong!” Lowering his fist, he proceeded in a normal voice.”Then he hurled numerous biblical versus at our heads as we walked away…But screaming is by far the most common reaction, from both men and women.”

Overall this was a great debut book for a series.  Sure, it left some things unanswered, but that is to be expected since this is going to be a series. I would have liked to have had a little more background on Sarah, but that wasn’t too much of an issue for me.  The only other problem with the book that I found was how fast and neat the problem was solved in uniting Roland and Sarah.  When Seth announced that they could be together after a certain problem that was the relationship breaker, I felt it was too easily explained with no back story to make it believable.  Maybe a few scenes supporting this solution throughout the book would have made it more believable.

If you are a fan of the writing style of Lynsay Sands and Gena Showalter, I think you will have a pleasant time reading this book. I can’t wait for the next story in the series that will feature Marcus as the main character!