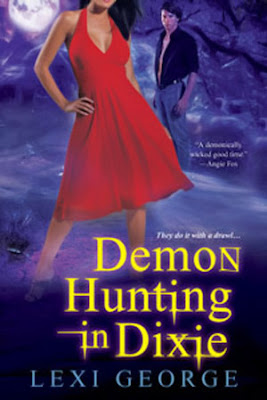 DEMON HUNTING IN DIXIE
Author: Lexi George
Source: Author Submission
*I received this book free of charge in exchange for an honest review*

Addy Corwin is a florist with an attitude. A bad attitude, or so her mama says, ’cause she’s not looking for a man. Mama’s wrong. Addy has looked. There’s just not much to choose from in Hannah, her small Alabama hometown. Until Brand Dalvahni shows up, a supernaturally sexy, breathtakingly well-built hunk of a warrior from—well, not from around here, that’s for sure. Mama thinks he might be European or maybe even a Yankee. Brand says he’s from another dimension.

Addy couldn’t care less where he’s from. He’s gorgeous. Serious muscles. Disturbing green eyes. Brand really gets her going. Too bad he’s a whack job. Says he’s come to rescue her from a demon. Puh-lease. But right after Brand shows up, strange things start to happen. Dogs talk and reanimated corpses stalk the quite streets of Hannah. Her mortal enemy Meredith, otherwise known as the Death Starr, breaks out in a severe and inexplicable case of butt boils. Addy might not know what’s going on, but she definitely wants a certain sexy demon hunter by her side when it all goes down. . .

I have sat here all morning after finishing this book trying to figure out the right words and descriptions to summarize my reading experience of this book.  I am finding it difficult to write the review because while there were many things I enjoyed about this book, there were also some things that weren’t so great about it.

First of all, this author knows her Southern charm and manners.  The way the characters act and speak were reminiscent of Southern hospitality.  The phrases the characters would blurt out were ones you would expect and come to enjoy as you read the book.  There was the perfect amount of snark and humor that kept me laughing from one page to the next which is hard to do unless the author can create characters that can handle this type of personality.

Addy was a laugh out loud a minute character.  She always had something smart and witty to say to anyone who crossed her path.  She was not afraid to speak her mind and not one person besides her Mother was exempt from the things she would have fly out of her mouth.  I absolutely loved her personality!  Brand was just as humorous since he was from another dimension and found himself trying to figure out what Addy was saying most of the time.  Some of the things he understood, but most of the time he had to have some of the phrases broken down for him which Addy was glad to elaborate on. My favorite scene in the entire book had to be when they were at the funeral home and Shirley and Bessie Mae were fighting over a dead guys private parts!  The whole entire scene had me in tears from laughing so hard.

Addy’s Mother was the typical stuck up snob of the group who was determined to make sure everyone spoke properly and act like ladies and gentlemen.  I wanted to strangle her at times just like Addy wanted to. Aunt Muddy was a riot.  I loved her spunk and funny entrance into the series.  Talk about bad timing for Addy when Aunt Muddy returns from her trip!  Evie, Addy’s best friend, was charming and shy which balanced the relationship between the two.  Where Addy was spontaneous and full of life, Evie was reserved and graceful.  Ansgar, Brand’s warrior brother, was cold and at times a stick in the mud.  Yet, when Ansgar meets Evie, the cold thaws and you get to see a softer side of him  My heart broke towards the end of the book for this character.  I hope he gets a story of his own.

Even though the characters were fun and I laughed through most of the book,  the story and plot were not as strong.  Brand and Ansgar are suppose to be demon hunters, but there was not a lot of action and fighting in the book.  They hardly engaged in battle and the action sort of took a backseat to the humor and personal lives of the characters.  It didn’t seem to balance well and left the story feeling a little off.  While I liked the personalities of Addy and Evie, their acceptance of demons and such was a little too accepting.  They didn’t really struggle with finding out about paranormal creatures and such, they just seemed to accept it and move on.  There is also a lot of characters in the book to keep track of.  Not only is it full of different people, but the book also created small stories involving Addy’s brother and friends as well.  While sometimes this can be a good thing, I felt the author could have toned down a little bit on the character overload and gradually paced their stories to use in future books.

Overall, I loved the characters but I wasn’t a big fan of the story and speed of the book.  Will I read the next book? Definitely!  I need my Addy fix and I am dying to know if Ansgar is going to work things out as well.