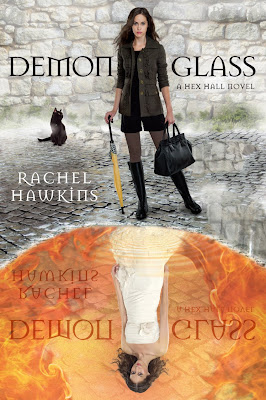 Sophie Mercer thought she was a witch.

That was the whole reason she was sent to Hex Hall, a reform school for delinquent Prodigium (aka witches, shapeshifters, and fairies). But that was before she discovered the family secret, and that her hot crush, Archer Cross, is an agent for The Eye, a group bent on wiping Prodigium off the face of the earth.

Turns out, Sophie’s a demon, one of only two in the world—the other being her father. What’s worse, she has powers that threaten the lives of everyone she loves. Which is precisely why Sophie decides she must go to London for the Removal, a dangerous procedure that will destroy her powers.

But once Sophie arrives she makes a shocking discovery. Her new friends? They’re demons too. Meaning someone is raising them in secret with creepy plans to use their powers, and probably not for good. Meanwhile, The Eye is set on hunting Sophie down, and they’re using Acher to do it. But it’s not like she has feelings for him anymore. Does she?

Oh my! Where do I even begin with this book? After reading Hex Hall, I was so excited to read this book!  The cover was amazing, and the book surpassed my expectations! Author Rachel Hawkins has an amazing gift for writing books that capture your interest and keep you gripping the pages until the end.

Sophie is such an amazing main character! It seems nothing fazes her, but we all know that inside she is far from calm at times.  Of course we get to be introduced to Archer again, and be prepared to be swooning.  We finally get some background on him that makes the character realistic and believable.  We also get to meet Sophie’s Father in this book. Not only does he make an appearance, but it is in the beginning of the book when it matters, not near the end at a climax. Cal also makes a reappearance and when you find out why he so involved in this book by Chapter 3, you will be shocked and laughing at the whole situation. Be prepared to have your feelings flip flop between Cal and Archer by the end of the book.  I was on the fence about this part of the story only because it is such a hard decision that Sophie will have to make.

Full of surprises and gripping suspense, the author balances the fun and romance as well.  With another cliffhanger to tease the readers, all I can say is write faster Rachel Hawkins! Don’t leave us in suspense again for too long!  Demonglass, in my opinion, was better than Hex Hall.  The writing has improved, the story is progressing, and the witty dialogue and suspense is amazing!