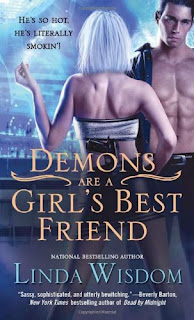 DEMONS ARE A GIRL’S BEST FRIEND
Author: Linda Wisdom
Source: Publisher
*I received this book free of charge in exchange for an honest review*

Feisty witch Maggie enjoys her work as a paranormal law enforcement officer—that is, until she’s assigned to protect a teenager with major attitude and a sleazy boyfriend. A group of satanic Mayans priests has decided Courtney has a drop of divine blood in her—making her just the virgin sacrifice they need to release their God and rule the world.

To prevent this catastrophe, Maggie must team up with half fire demon Declan, the proprietor of Damnation Alley, an underground club and busy demon portal. Declan will be damned if he’ll allow his demon race to be blamed for the malicious acts of some evil Mayans. So he decides to seduce the sexy witch in an effort to discover what the law enforcement agency knows about the Mayan’s plans, but then things get more than a little hot, and Declan finds himself seriously entangled with the sexiest woman he’s ever met…

This is my first book I have read by this author.  I was excited to start this one since everyone raves about her writing and characters that she can come up with.


As I started reading the book, I was sucked into the realm of demons, witches, fairies and other supernatural creatures.  I was excited to read about a heroine that not only kicks butt, but has a personality of humor and sensitivity as well.  I liked the character of Maggie.  She could kick butt with the other creatures and embraced her witch abilities to full force.  She could douse you with water with the flick of her wrist and turn you into your worst animal nightmare with a thought.  Declan, a demon with a secret, was also kick butt and had a temper to match his powers.  He was a fire demon that could light up a room faster than a gas drenched building made of old wood.  You could sense his moods with the simple feeling of the room temperature.


While I found the two to have some great chemistry and the plot was fun, the book was not as great as I expected.  The romance so too quick and far apart with not much romance to keep it exciting.  The characters were quirky, but at times there were too many to care about.  I wanted the book to focus more on the main characters instead of the surroundings and other people in the book.  At times it felt that the plot was stalling as well.  It seemed to get moving and the action would pick up, yet once it reached a certain point, it flat lined and was left in a climatic limbo.  Then the author would have to pull us back in and get us moving with more action before starting the process all over again.


While I enjoyed the humor, witty dialogue and supernatural elements of the book,  the story as a whole was just mediocre.  I understand that this is the first in a series, and certain characters and plots had to be set up for future books, but I like my main characters to interact more than what was presented in this book.  Not a bad read, but not one of the great reads either.