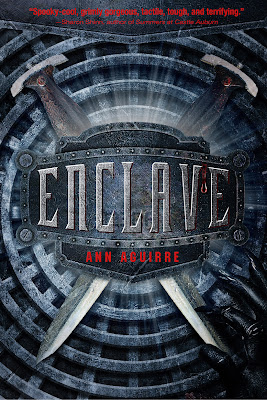 ENCLAVE
Razorland #1
Author: Ann Aguirre
Source: Publisher
*I received this book free of charge
in exchange for an honest review*

In Deuce’s world, people earn the right to a name only if they survive their first fifteen years. By that point, each unnamed ‘brat’ has trained into one of three groups–Breeders, Builders, or Hunters, identifiable by the number of scars they bear on their arms. Deuce has wanted to be a Huntress for as long as she can remember.

As a Huntress, her purpose is clear—to brave the dangerous tunnels outside the enclave and bring back meat to feed the group while evading ferocious monsters known as Freaks. She’s worked toward this goal her whole life, and nothing’s going to stop her, not even a beautiful, brooding Hunter named Fade. When the mysterious boy becomes her partner, Deuce’s troubles are just beginning.

Down below, deviation from the rules is punished swiftly and harshly, and Fade doesn’t like following orders. At first she thinks he’s crazy, but as death stalks their sanctuary, and it becomes clear the elders don’t always know best, Deuce wonders if Fade might be telling the truth. Her partner confuses her; she’s never known a boy like him before, as prone to touching her gently as using his knives with feral grace.

As Deuce’s perception shifts, so does the balance in the constant battle for survival. The mindless Freaks, once considered a threat only due to their sheer numbers, show signs of cunning and strategy… but the elders refuse to heed any warnings. Despite imminent disaster, the enclave puts their faith in strictures and sacrifice instead. No matter how she tries, Deuce cannot stem the dark tide that carries her far from the only world she’s ever known.

Wow! I am in awe of this book.  I will be the first to admit that I am not a big fan of the dystopia genre. I really didn’t start enjoying this genre until I read The Hunger Games series.  When the publisher sent me the copy of Enclave, I wondered if it was going to have the same impact on me.  I literally stayed up late reading this book.  I could not put it down.

Deuce and Fade were great together.  I found the writing to be wonderful and gripping.  I was rooting for these two young fighters.  I wanted a romance to blossom between the two.  Deuce has grown up underground and never seeing the topside of the world.  She has believed everything her elders have told her and is determined to make it as a Huntress.  In the underground world after the Apocalypse, they have Hunters, Breeders, and Builders.  Deuce has been chosen to become a Huntress.  When she officially becomes one, they have a naming ceremony where you receive your rank with marks on your body.  Whatever the blood drips on amongst the gifts laid at your feet, that becomes your name. Until this time you are just a number amongst all of the children that are referred to as Brats.

Fade came from Topside.  He lived above ground until he lost his way and the Enclave took him in and kept him under close watch.  They eventually marked him as a Hunter and is paired up with Deuce on her naming day.  At first, things are tense between the two, but on patrol they form a bond that sparks some romance.  We slowly learn more about Fade the more you read, and I grew to love him with every page I turned.  They were a perfect fit together that I enjoyed.

When they are both exiled from the Enclave, they are forced to live Topside.  Together they make new friends, find more enemies, and decide to find a better way of life.  As each one discovers new things about the other, the author also portrays the awe perfectly as the two find artifacts and learn new ways to survive.

When I reached the end of the book, some questions were left unanswered, but left you with just enough to satisfy you and keep you hungry for the next book in the series.  I wish we could have learned more about the cause of the Apocalypse from the beginning instead of in the authors notes at the end of the book.  I  am curious to know what comes after the last chapter and personally can’t wait for the next book titled Outpost that is scheduled for release in the Fall of 2012.  It will be a long wait, but if Enclave is just a sampling of what is to come, then it will be worth it!

Outstanding Book That Will Stay On My Bookshelf
For Rereading! 5 STARS
YouTube Trailer: