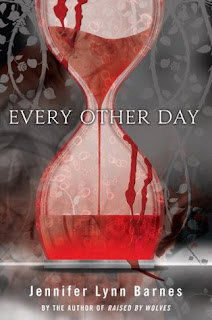 Every other day, Kali D’Angelo is a normal sixteen-year-old girl. She goes to public high school. She attends pep rallies. She’s human.


And then every day in between . . . She’s something else entirely.


Though she still looks like herself, every twenty-four hours predatory instincts take over and Kali becomes a feared demon-hunter with the undeniable urge to hunt, trap, and kill zombies, hellhounds, and other supernatural creatures. Kali has no idea why she is the way she is, but she gives in to instinct anyway. Even though the government considers it environmental terrorism.


When Kali notices a mark on the lower back of a popular girl at school, she knows instantly that the girl is marked for death by one of these creatures. Kali has twenty-four hours to save her and, unfortunately, she’ll have to do it as a human. With the help of a few new friends.

I was a big fan of Jennifer Lynn Barnes and her Raised By Wolves series.  When I saw that she had a new book releasing that wasn’t part of that series, I just knew I was going to have to read it.  I was curious to see what else the author could bring to the table with a completely different world.

With Every Other Day, we step away from the werewolf way of life and step into a world where demon hunting is the every other day norm for Kali. One day she is a normal teenager and the next she is a kick butt demon hunting girl with severe predatory instincts kicking in.  While I enjoyed her character on the kick butt days, when she was just human Kali I found her to be a little annoying.  She was depressing and at times I wanted to slap her out of her pity parties.  I also didn’t like the repetitive dialogue over and over again whenever she fought the bad guys of the book.  I read it once, so I don’t need to read it again.  I will say that the author has grown with her writing though.  She has definitely stepped up her game in the story telling but just needs to reign in the narrative parts a little more.

While I enjoyed the book and the story the author was telling, it didn’t give me the wow factor that I was expecting like I had with the Raised By Wolves series.  Still, I wouldn’t mind reading future books in this paranormal world especially with the way this one ended.