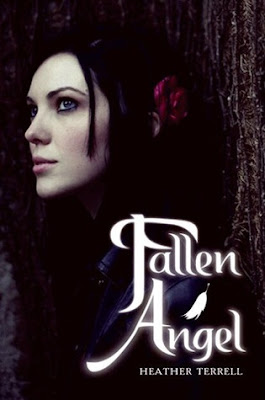 Ellie was never particularly good at talking to boys—or anyone other than her best friend and fellow outcast, Ruth. Then she met Michael.

Michael is handsome, charming, sweet. And totally into Ellie. It’s no wonder she is instantly drawn to him. But Michael has a secret. And he knows Ellie is hiding something, too. They’ve both discovered they have powers beyond their imagining. Powers that are otherworldly.

Ellie and Michael are determined to uncover what they are, and how they got this way . . . together. But the truth has repercussions neither could have imagined. Soon they find themselves center stage in an ancient conflict that threatens to destroy everything they love. And it is no longer clear whether Ellie and Michael will choose the same side.

In this electrifying novel, Heather Terrell spins a gripping supernatural tale about true love, destiny, and the battle of good versus evil.

To be honest, the cover to this book is what captured my interest.  I love the side view of the girl and the font of the title was great.  Then I read the back of the book and I knew I had to read this book!

Ellie has always been one of the odd girls out in school.  She has never been part of the popular crowd which suits her just fine.  Ellie seems like a normal high school girl, except with a brief touch she can receive visions from the person she brushes up against.  She tries to avoid any contact because she doesn’t always like what she sees in these visions.

When Michael starts to attend her school, they are both drawn to each other.  Michael is obviously one of the popular kids in school and doesn’t understand his attraction and fascination with her.  It is revealed that they both knew each other from a previous trip that both of their families had been on.  While Ellie can’t seem to remember him, Michael definitely is remembering Ellie.

Together, they try to figure out the attraction between each other and why their parents are hiding so many secrets from them.

While I think the romance between Ellie and Michael could have been sweet, it seemed to be a little off with me.  In some instances I felt that Michael even came off as a bit of a stalker at times.  Yet as the story progressed and we neared the end of the novel, I found myself warming up to the blossoming romance between the two.  Of course, with the plot twists and suspense that follows before we near the end of the book, we start to understand why their romance was hard to understand and enjoy.

The book flowed at a fairly nice pace, even if some parts felt a little boring.  In certain points of the book, I was ready for the author to move on and get to another point in the plot.  I enjoyed the characters of Ellie and Michael, but I didn’t fall in love with them like I should have.  Like I said, I didn’t really warm up to them until the end of the book which made it hard to invest in their story.

While I liked the book, I didn’t love the book.  There were good points and there were bad points to it.  I will give the next book in the series a go though because now that this book is over, I finally have an interest in the couple and what the author will bring to them next.