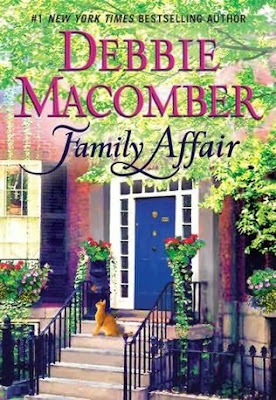 FAMILY AFFAIR
Author: Debbie Macomber
Source: Publisher
*I received this book free of charge
in exchange for an honest review*

Lacey Lancaster has always longed to be a wife and mother. However, after a painful divorce, she decides it’s time to lay low for a while in her charming San Francisco apartment with her beautiful Abyssinian cat, Cleo.

Everything would be wonderful, except for her utterly impossible neighbor Jack Walker. When he’s not arguing day and night with his girlfriend, begging her to move in with him, he’s chasing down his cat named Dog, who seems determined to get Cleo to succumb to his feline advances.

Then Lacey discovers the awful truth – Cleo is in the family way and Dog’s to blame. She’s furious that neither Jack nor his amorous animal seem too upset about the situation.

But Lacey learns that things are not quite as they seem. Jack’s “girlfriend” is really his sister – and his intentions toward Lacey are very honorable. And though she’s not quite sure about Dog, Lacey begins to discover the tender joy of falling in love all over again.

This was my first book by this author even though I had heard wonderful things about her books.  While I enjoyed the characters of Lacey and Jack, I felt the story had some problems along the way.

Let me first start off by saying that this is a fairly short and quick read at only 99 pages.  I was able to read and finish this book within an hour.  Seeing how it is a short read, maybe the author intended it to be rushed and fast paced.  I just couldn’t see Lacey, who has just recently divorced, rush into the relationship with JAck as fast as she did. Jack was very patient with Lacey and had been trying to pursue her for a year, yet within a matter of weeks of their cats doing the deed, they fall in love with each other.  I would have liked to have seen the romance build a little more instead of within a few chapters.

As for side characters, we don’t get much interaction with them. A phone call here and there and a few meetings between Lacey and Sarah, who happens to be Jack’s sister. The saving grace of this book, in my opinion, was the author’s humor that she portrayed in the characters.  I loved how Jack wanted a dog but ended up with a cat that he names Dog!

Even though this isn’t a great book in my opinion, I would still read more by this author just by the fact that everyone raves about her writing.  Maybe a longer novel by her is what I need to get hooked on her books.  If you are a fan of hers though, I say give it a go.  If you are like me and reading her for the first time, I would go for one of her longer novels before deciding on this one.