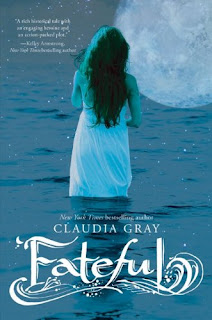 FATEFUL
Author: Claudia Gray
Source: Publisher
*I received this book free of charge in exchange for an honest review*

In Fateful, eighteen-year-old maid Tess Davies is determined to escape the wealthy, overbearing family she works for. Once the ship they’re sailing on reaches the United States, she’ll strike out on her own. Then she meets Alec, a handsome first-class passenger who captivates her instantly. But Alec has secrets….

Soon Tess will learn just how dark Alec’s past truly is. The danger they face is no ordinary enemy: werewolves are real and they’re stalking him—and now Tess, too. Her growing love for Alec will put Tess in mortal peril, and fate will do the same before their journey on the Titanic is over.

Featuring the opulent backdrop of the Titanic, Fateful’s publication is poised to coincide with the 100-year anniversary of the ship’s doomed maiden voyage. It is sure to be a hit among Titanic buffs and fans of paranormal romance alike.


I was a little worried about reading another book involving the Titanic because we all know how that story ended — the boat sinks and people die.  Even though I knew what to expect with the Titanic and its voyage,  I had no idea the author would suck me into such a wonderful story involving Tess and Alec!


Tess has been a maid servant for the Lisle family for years.  She is maid to Lady Irene and the only nice one of the Lisle family.  She plans on resigning from her position once the Titanic docks in America unbeknownst to the Lisle family.  She wants to start a new life in a new country doing things her own way.  During the voyage, she meets the stranger that rescued her from a wolf attack the night before the ship sails.  He is handsome and mysterious which leads you to believe that it is going to be a sweet romance.  Unfortunately, Alex warns her to stay away from him for reasons Tess can only imagine being because she is a servant and he is rich.  What she doesn’t know is the secrets Alex is hiding along with danger at every turn!


I fell in love with the sweet and tender romance between Alec and Tess.  I loved how it progressed and the mystery and suspense that is involved.  I admit, I kept waiting for Jack and Rose to appear, but I settled with Astor and Ismay.  The author did a wonderful job detailing the ship without going overboard and I felt myself wandering the ship along with Tess in my mind.  It was nice to see the life of a servant aboard the Titanic instead of just the rich and famous.  We get a peek into the life that they lived and how much they went through aboard the ship and in life.


Even though we know how the Titanic ends, you won’t see the ending of Fateful coming!  I loved how it ended and I do hope that the author will find some way of continuing this story!  With the 100 year anniversary of Titanic approaching, Fateful is a book that help you remember the people of Titanic of all classes.  Throw in some love, suspense, destruction and supernatural and you have a book to keep you afloat all day and all night!