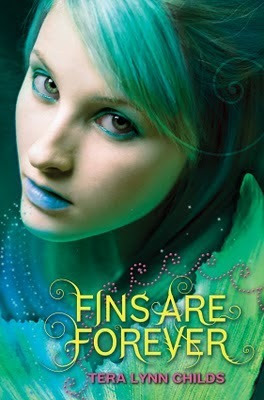 On Lily Sanderson’s eighteenth birthday she’ll become just a girl—still a mer girl, true, but signing the renunciation paperwork will ink Princess Waterlily of Thalassinia out of existence. That leaves plain old Lily living on land, dating the boy she loves, and trying to master this being human thing once and for all.

Now that Lily and Quince are together, mer-bond or not, she’s almost content to give up her place in the royal succession of Thalassinia. But just when she thinks she has everything figured out, Lily’s father sends a certain whirlpool-stirring cousin to stay with her on land. What did Doe do to get herself exiled from Thalassinia and stuck in terraped form, when everyone knows how much she hates humans? And why why why is she batting her eyelashes at Lily’s former crush, Brody?

The seafoam on the surf comes when a merboy from Lily’s past shows up. Tellin asks Lily for something that clouds her view of the horizon. There’s a future with Quince on land, her loyalty to the kingdom in the sea, and Lily tossing on the waves in the middle. Will she find a way to reconcile her love, her duty, and her dreams?

I just love it when a sequel can live up to the expectations that a reader has after reading the first book in a series!  With Fins Are Forever, the author did an amazing job of making the second book just a fabulous as the first!


Lily is getting ready to turn eighteen and give up her place as future Queen of Thalassinia.  She loves the human world and is looking forward to a future with Quince on land.  She thought she just had problems with trying to figure out the answers to the SAT questions, but little does she know that bigger problems are about to arrive in the form of her cousin Doe.  After Doe is exiled from Thalassinia, she must live with Lily on land and learn to accept humans.  Doe loathes humans since the death of her parents a while back and can’t stand anything about them.  This all starts to change though when Doe meets Brody, Lily’s previous crush.


Without getting into too many spoilers, I will say that some of the antics that Doe initiates was hilarious and typical of her spoiled brat personality.  I could feel the frustration that Lily was going through in dealing with Doe on land.  Even though this is a young adult paranormal read involving an underwater kingdom, the author makes the characters feel like regular humans with ordinary teen problems.  Okay, well sometimes they are ordinary teen problems and sometimes they are mermaid problems!


Another amazing and fun book written by a fabulous author!  Fins Are Forever is a wonderful follow-up sequel to Forgive My Fins and it definitely did not disappoint!