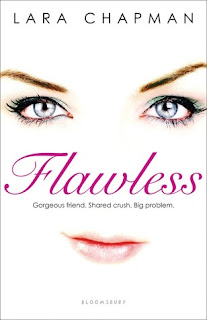 FLAWLESS
Author: Lara Chapman
Source: Publisher
*I received this ARC copy free of charge in exchange for an honest review*

Sarah Burke is just about perfect. She’s got killer blue eyes,
gorgeous blond hair, and impeccable grades. There’s just one tiny—all right, enormous—flaw: her nose. But even that’s not so bad. Sarah’s got the best best friend and big goals for print journalism fame.

On the first day of senior year, Rock Conway walks into her journalism class and, well, rocks her world. Problem is, her best friend, Kristen, falls for him too. And when Rock and Kristen stand together, it’s like Barbie and Ken come to life. So when Kristen begs Sarah to help her nab Rock, Sarah does the only thing a best friend can do—she agrees. For someone so smart, what was she thinking?

This hip retelling of Cyrano de Bergerac is filled with hilariously misguided matchmaking, sweet romance, and a gentle reminder that we should all embrace our flaws.

I admit, the cover was not too appealing to me.  When I first glanced at it, I had that ‘meh’ feeling. Even after reading the summary, I was still not convinced that it would wow me by the last page.  Boy, was I wrong.

Sarah has always been insecure around people due to the size of her nose.  Honestly, reading the book and trying to imagine her nose, the only image I could bring up in my mind was Gonzo from The Muppet’s.  Then as I read more, it would morph into the nose from that movie Roxanne that Steve Martin had.  Even though this book was focused on Sarah and her nose,  I eventually started to enjoy the story that was underneath it all.  I loved the character of Rock, even when he was naive and easily fooled by the antics of Sarah and Kristen.  I wasn’t a big fan of Kristen though in this book.  Yes, she was protective of Sarah, but she lacked a certain depth that would have made me connect better with her.  I couldn’t understand why she was trying so hard to impress one boy.  After I sat and thought about it though, I realized Kristen was doing  it based on looks alone that rounded out the story and gave us the outlook on both sides.  One was scared to be noticed due to a flaw, one was scared to show her true self due to being based solely on her looks at times, and one wanted to be accepted in a new school with new people.

Each character brought something unique to the story which made the book that much better.  I will state that I was not a big fan of the ending.  While it had the outcome I was cheering for, I felt it was too quickly resolved and done within a few pages.  I would have liked to have seen a little bit more and the results of the outcome with other characters included.

Overall a good book especially for teen girls struggling with fitting in and trying to fix their image. It has a great message behind it and is easily adapted for a teen to enjoy.