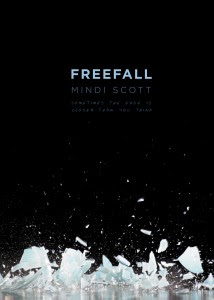 How do you come back from the point of no return?

Seth McCoy was the last person to see his best friend Isaac alive, and the first to find him dead. It was just another night, just another party, just another time where Isaac drank too much and passed out on the lawn. Only this time, Isaac didn’t wake up.

Convinced that his own actions led to his friend’s death, Seth is torn between turning his life around . . . or losing himself completely.

Then he meets Rosetta: so beautiful and so different from everything and everyone he’s ever known. But Rosetta has secrets of her own, and Seth will soon realize he isn’t the only one who needs saving . . .
MY THOUGHTS:
The first thing that attracted me to this book was the cover. Something about the shattered glass and the title gave it the feel of angst, pain and hopefully redemption.
The characters of Seth and Rosetta were amazing.  I loved the gradual romance instead of it being immediate.  It was a slow build as they both worked through different yet painful history.  Rosetta is from the nicer side of the tracks where she is living with her Aunt and Uncle.  Her parents died in a car crash that was caused by a drunk driver.  She has a fear of riding in cars because of it and is trying to find a way to work through it.  Seth is in a downward spiral after finding his best friend Isaac dead after a party.  He feels responsible for it and it has even made it difficult to perform in front of people with his band.
The summary above does nothing to really describe the intensity of this book.  You can actually feel the pain that Seth is going through and want to help him through it.  The one and only problem I had with this book is that Isaac is such a focus in this book for Seth, yet we never got to really know Isaac.  It would have been nice for a few chapters in the beginning to have seen a glimpse of what his demeanor was like and had some interaction with him so the reader could understand better what Seth was feeling.  To me, Isaac was just a name in the book, not a character that could have come alive in my head.
This book has the romance of teen love, teen angst, and high school drama that makes this authors debut story a great read with a great plot.  I personally can’t wait to see what the author can bring to us in the future and hopefully sooner rather than later.  A raw but well written view of high school years and young love that will keep you captivated until the last page.
MY RATING: