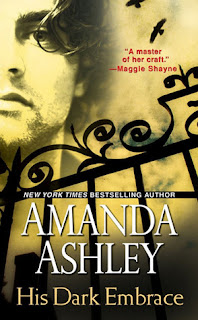 A VAMPIRE’S KISS. A WOMAN’S SURRENDER.


Tall, dark, mysterious—and with a faint scar on his cheek that only makes him more gorgeous—Kaiden Thorne is one schoolgirl obsession Skylynn never forgot. Now, returning to her childhood home after eight years, she can’t believe her reclusive neighbor is still living across the street—and hotter than ever. Skylynn doesn’t know how Kaiden manages to stay so young, virile, and impossibly attractive. But she knows she wants him…even if he harbors a fearful secret he refuses to tell her.


When Kaiden sees the beautiful young woman Skylynn has become, he can no longer control the bloodlust that is his true nature. Once he pulls Skylynn into his arms, presses his lips against hers—and accidentally draws blood—he longs for more. Only she possesses what he wants and what he needs. Only she can save him or destroy him. But once Skylynn agrees to help Kaiden battle his darkest desires, there is no turning back…

Oh Ms. Ashley, how you love to tease me and indulge my vampire fantasy!  I am a sucker (no pun intended) for a vampire romance. What truly makes a vampire romance stand out for me though is how they were written before the vampires became sparkly and soft.  I love them bad, tough, secretive and edgy.  Author Amanda Ashley has never let me down with making a vampire romance a true dark and beautiful read.

Skylynn has watched and admired Kaiden from across the street from a young age up until adulthood.  She remembers having a teenage crush on him even with his unusual quirks.  So what if he only mowed his lawn at night. So he never quite aged as much as other people.  As a teen she looked over those mysterious and crushed anonymously on him.  Kaiden was her Grandfather’s friend.  When Kaiden would come over and join her Grandfather in his lab, she never knew what happened behind closed doors.  She would hear bits and pieces of conversation, but never got the whole story.  Her brother also had questions, but never ventured in asking them.

Now she is an adult, her brother is missing, and her Grandfather has just passed away.  Skylynn is forced to return to her childhood home and begin settling her Grandfathers estate.  Should she keep the house or sell it? What should she do with all of his medical journals and supplies? Shortly after returning,  Skylynn is surprised to see Kaiden return to his home as well across the street.  Even more surprising is the fact that he still looks as gorgeous and youthful as he did so many years ago.  It seems that Skylynn’s Grandfather had been making a medicine of sorts for Kaiden and he is running out of the last batch.  He is hoping that Skylynn will help him out and look around her Grandfather’s lab for the formula.  Unfortunately, Kaiden is not the only person wanting the formula. Another person is wanting it and willing to do whatever it takes to find it — including hurting Kaiden by going after Skylynn.

I really enjoyed the sweet romance between Kaiden and Skylynn.  They have known each other for years, but never acted on their feelings.  At first I was a little timid watching the two start a romance for the simple fact that Kaiden watch Skylynn grow up from a child.  True, he didn’t have sexual feelings for her when she was young, but that doesn’t seem to make me ignore the fact that it seemed wrong.  Once I moved past that though, I enjoyed reading about their romantic progression and the hopes in finding the formula. When the formula is revealed at the end of the book — which is easy to figure out once you think about it — you will be laughing along with the characters at the creative way Skylynn’s Grandfather had hid it.

If you are looking for a darker and less sparkly vampire romance, then I urge you to give author Amanda Ashley a try.  Not only does she do them well, but she has many to choose from for days of reading enjoyment.

Very Good! I would recommend this book!
*I received this ARC copy free of charge in exchange for an honest review*