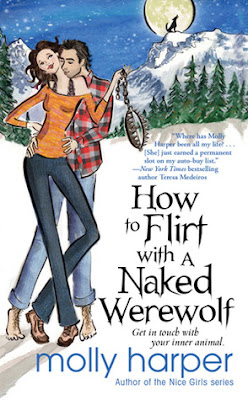 HOW TO FLIRT WITH A NAKED WEREWOLF
Author: Molly Harper
Source: Publisher
*I received this book free of charge
in exchange for an honest review*

Even in Grundy, Alaska, it’s unusual to find a naked guy with a bear trap clamped to his ankle on your porch. But when said guy turns into a wolf, recent southern transplant Mo Wenstein has no difficulty identifying the problem. Her surly neighbor Cooper Graham—who has been openly critical of Mo’s ability to adapt to life in Alaska—has trouble of his own. Werewolf trouble.

For Cooper, an Alpha in self-imposed exile from his dysfunctional pack, it’s love at first sniff when it comes to Mo. But Cooper has an even more pressing concern on his mind. Several people around Grundy have been the victims of wolf attacks, and since Cooper has no memory of what he gets up to while in werewolf form, he’s worried that he might be the violent canine in question.

If a wolf cries wolf, it makes sense to listen, yet Mo is convinced that Cooper is not the culprit. Except if he’s not responsible, then who is? And when a werewolf falls head over haunches in love with you, what are you supposed to do anyway? The rules of dating just got a whole lot more complicated. . . .

Just look at that cute cover!  I love the fun look it has even if the male on the front is a little different that what I thought Cooper looked like.  The cover portrays the fun and sometimes hilarious feel of the book! While I have the Nice Girls series by the author, I haven’t had a chance to read them yet.  So I was excited to finally get to sit down and read at least this series by her!

Mo was brought up by hippies that were a little out there.  She has struggled her entire life to break free of their beliefs and such.  When she breaks up with her boyfriend Tim, she heads off to the great town of Grundy, Alaska.  The book begins with Mo finally arriving in Grundy after leaving her roots in the South.  To say she was in for a shock is speaking lightly.

After landing a job at the local bar/restaurant  in Grundy, she meets Cooper.  Cooper is the typical brooding and surly Alpha of the book.  Mo quickly discovers his secret of being a werewolf and quickly adapts to the discovery.

While I enjoyed the book, I found parts of it not as exciting.  I felt that Mo was too quick to accept what Cooper was and felt she should have had at least one or two panic scenes.  Cooper was broody but his past problems were not really a plausible excuse for his actions.  He would be lovey and sweet one minute, and then just as quickly he is snapping his mouth at everything.  Some parts of the book would be fast paced, yet some parts seemed to drag.  Just when it would start to get going at a nice pace, either it would jump ahead in the time line too quick or slow down to the point of wanting to put the book down.

After finishing the book, I was still pleased with it.  It had flaws, but the book was still enjoyable and was exactly how I expected it to be by looking at the cover.  I knew I would be getting a fun and humorous read.  I knew it wasn’t going to be a serious themed book but a book that leaves you with a smile and feel good feeling when finishing. Not one of my favorite books, but definitely not the worst.  I would recommend this read if you are looking for a feel good read.  Furry and fun with a cute romance in between!

“You know how some people just rub you the wrong way?  Well. Cooper’s my own personal sandpaper.”

“He’s like that with everybody,” Darby assured me.  “Don’t take it personally.  Some people were just born with a pinecone shoved up their butts.  In Cooper’s case, it’s lodged sideways.”