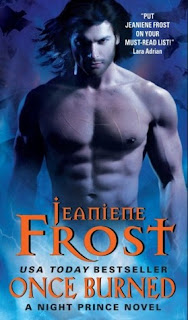 She’s a mortal with dark powers…


After a tragic accident scarred her body and destroyed her dreams, Leila never imagined that the worst was still to come: terrifying powers that let her channel electricity and learn a person’s darkest secrets through a single touch. Leila is doomed to a life of solitude… until creatures of the night kidnap her, forcing her to reach out with a telepathic distress call to the world’s most infamous vampire…


He’s the Prince of Night…


Vlad Tepesh inspired the greatest vampire legend of all — but whatever you do, don’t call him Dracula. Vlad’s ability to control fire makes him one of the most feared vampires in existence, but his enemies have found a new weapon against him – a beautiful mortal with powers to match his own. When Vlad and Leila meet, however, passion ignites between them, threatening to consume them both. It will take everything that they are to stop an enemy intent on bringing them down in flames.

OH. MY. GOD!!!!  It is finally here! The book we have all been waiting for in the great world that author Jeaniene Frost has created.  We finally get Vlad in all of his sexy glory.  I admit that when this book arrived for me to review, I almost fell over from excitement.  I screamed in joy, overheated at the sexy cover, and even told my family to get the heck out of the way while I ran for my favorite reading chair.  The family went without dinner.  They were not allowed to bother me.  All regular chores ceased as Vlad arrived in my mailbox.

We start off in the story reading about Leila and her life.  She is disfigured due to a freak accident long ago by   touching a downed power line and has joined the carnival as an entertainer.  She is aware of vampires in the world because her partner for her act is a midget vamp.  Don’t let Marty’s small stature make you think he is a puny vamp though.  He is like a Father figure to Leila and he has a heart bigger than most regular sized people.

When Leila is kidnapped by other vampires, she is forced to use some of her other ‘gifts’ that came about after the energy absorbed from the power line.  She can touch things with her right hand and send out electrical shocks.  She can also see glimpse’s of the past, present and future with a small touch.  She pulls these glimpse’s from leftover essence that a person leaves behind on things.  The vampires that have kidnapped her are working for a stronger vamp who is searching for Vlad.  He wants revenge on Vlad and will use any means necessary to get him.  When Leila is forced to use her gifts, she is surprised to learn that Vlad can hear her spying on his present.  She figures he is the less of the two evils and asks for his help.  Vlad comes to the rescue and sweeps Leila away to his castle in Romania so they can work together in finding the bad guy.

As they try to work together, Leila finds herself attracted to the mysterious and ruthless Vlad.  He has the sex appeal and strength she craves.  Leila has never been in a relationship before due to her ‘shocking gifts’ and is venturing down a new path with Vlad.  Her gifts have no real effect on Vlad and she can’t believe how wonderful it feels to touch someone without hurting him.  Vlad is his typical confident and arrogant self knowing how he is having an effect on her since he can read her mind.  What ensue’s is heated glances, confident flirting and a bunch of sexy time!

Oh yes, by this time in the book you are wondering the same thing.  Trust me in saying that the author does not disappoint in describing in glorious detail the image of Vlad’s body.  Before you even ask, yes there is even another hot and steamy shower scene that involves a very excited Vlad. *swoon*

As things get even more dangerous for Vlad and Leila, Vlad brings her family to his castle as well for protection.  We get to meet her father and Leila’s sister, Gretchen.  To see Leila so close to a man is shocking to say the least for them.  Especially when they notice Vlad is able to hold her hand with no show of pain.

I seized on the change of topic.  “These gloves are specialized rubber.  They block the current.”
Gretchen’s gaze traveled over Vlad, disbelief still stamped on her features.  “Yeah, but how do you two do anything else, unless he has a special, current-repelling glove for his —“
“Gretchen!” my father cut her off.
My cheeks felt hot.  Don’t say a word, I thought to Vlad, seeing his chest tremble with suppressed laughter.

The author does not disappoint with her flair of hilarity whenever Vlad is around.  He is even hilarious when Bones and Cat decide to make a brief appearance in the book.  Again, Bones loves to tease Vlad and he grabs the chance to tease at him when he teaches Leila how to block Vlad from reading her mind.

If I had one complaint about this book, it would only be the ending.  I can’t even really call it a complaint though.  The way it ends, you are left hanging with the knowledge that their story is far from over.  Since this is going to be at least a two book series, we have to wait until the next book to have some things resolved.  This was very frustrating only because we have waited so long as it is for Vlad to have his own book.  Now the reader has to wait again!

Overall the story sucked me in, chewed me up then spit me out. It left me wanting to read the story all over again.  I wanted Vlad before, but now I need more Vlad.  To say it is going to be a long and torturing wait is an understatement.  If you haven’t read about Vlad before, you are missing out on one of the sexiest alpha vamp’s in the paranormal genre!

Outstanding book that will stay on my bookshelf for rereading!
*I received this ARC free of charge in exchange for an honest review*