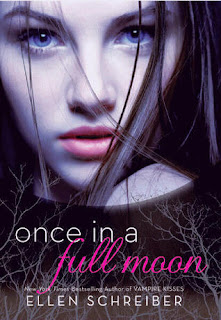 ONCE IN A FULL MOON
Author: Ellen Schreiber
Source: Around The World Tours

Celeste Parker is used to hearing scary stories about werewolves—Legend’s Run is famous for them. But when, after an unnerving visit with a psychic, she encounters a pack of wolves and gorgeous, enigmatic Brandon, she must discover whether his transformation is more than legend or just a trick of the shadows in the moonlight. Brandon may be Celeste’s hero, or he may be the most dangerous creature she could encounter in the woods of Legend’s Run.

This is one of those books that you get so excited about to read, not only because the cover is awesome, but is written from a well known and liked author.  When this book was offered as an ARC tour, I jumped on the chance to sign up for it.  While there were parts I really enjoyed, there were also parts that just didn’t do it for me.


In the town were Celeste and her friends live, it is divided in two sections of Westside and Eastside. When Celeste is rescued from a wolf attack by a new boy from school, she finds herself drawn to him.  Brandon is everything she is wanting in a boyfriend.  He is caring, loving and sweet.  She has just broken up with Nash, who is the high school jock, and never really felt like Nash was a great boyfriend. Brandon and Celeste start seeing each other in secret since they are from opposite sides of town.  Ever since Brandon rescued Celeste from the wolf attack, and being injured in the process, he finds himself turning into a werewolf on the nights of a full moon.


First of all, when I think of a werewolf, I think of big and hairy wolves! In the book, the only thing that really physically changes in Brandon is a new goatee and hair on his hands. He isn’t described as scary at all. In fact, he is described as even more handsome in Celeste’s eyes. Nash was a typical jock jerk, that couldn’t handle being dumped by his girlfriend, even though Celeste has found him with another girl from school sitting on his lap at a party. Ivy and Abbey, Celeste’s friends, were stuck up and snobby.  I couldn’t stand the parts of them in the book.


The book had parts that just left me shaking my head because it didn’t make sense.  Celeste was naive so many times in the story that their were times I wondered if she even had a brain! Brandon was the saving grace of this book.  I feel the book is more geared for pre-teens than for teens and adults.  The ending is also left open for another story that hopefully will answer some of the unfinished parts of the story that needed to be finished up.