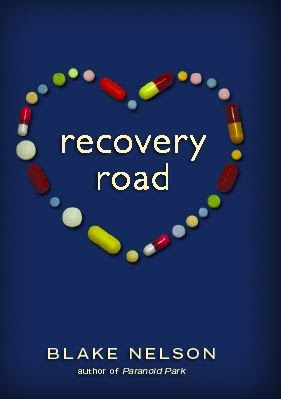 RECOVERY ROAD
Author: Blake Nelson
Source: Publisher
*I received this book free of charge in exchange for an honest review*

Madeline is sent away to Spring Meadows to help with a drinking and rage problem she has. It’s a pretty intense place, but there is the weekly movie night in town–where Madeline meets Stewart, who’s at another rehab place nearby. They fall for each other during a really crazy time in their lives. Madeline gets out and tries to get back on her feet, waiting for Stewart to join her. When he does, though, it’s not the ideal recovery world Madeline dreamed of. Both of them still have serious problems. And Stewart’s are only getting worse….

I was a little hesitant in reading and reviewing this book for the simple fact that it touches on some heavy and serious subjects.  Rehab, drug abuse, and even a small scene of attempted rape are touchy subjects in the young adult genre.  As I started to read this book though, I found that the author has done a wonderful and remarkable job at telling the story, touching on these subjects and keeping the interest of the reader.

In this heartbreaking story we meet Madeline and Stewart.  Both are at the rehab center called Spring Meadow.  Both characters are struggling to get over their addiction to drugs and alcohol. While I have never been to rehab or been in a situation like this, the author did such an amazing job of telling each characters story that I felt like I was right there with them both.  You could actually feel the pain and the struggle that each one of the characters goes through on a daily basis.  The two of them grow close even if it is against the treatment centers rules.  When Madeline is released, they both promise to find each other when Stewart finishes his rehab.

The story is broken up into parts.  The first part is dealing with the rehab and trying to work through the addiction.  Then we have the part of Madeline going home and trying to adjust to life after rehab. She tries to fit back in at school and is hesitant on making friends.  Along the way, Madeline finds new friends and new things are discovered about herself.  When Stewart is released, nothing seems to work out as they planned, yet Madeline believes she is in love with him.  It is like she traded one addiction of drugs, for the drug of love.

The story really starts moving at a quicker pace at this point.  Each part of the book is the next chapter in her life.  We slowly see Madeline try to climb over the obstacle of being a recovering addict and trying to make something for herself.  She finishes high school and even gets accepted into college.  We see her struggle, relapse and eventually make it out of the hole of despair.  Stewart on the other hand is fighting his own personal demons.  While I kept hoping that he would find the way to his happy ending, you could tell that the author was going to put you through some rough patches with Stewart.  By the end of the book I was crying tears of joy for Madeline and tears of sadness for Stewart.  When the story ends it  leaves you with hope, sadness, joy and strength.

A well written book for teens on the subject of drug abuse and consequences that can arise of this life changing and sometimes deadly addiction.  The book does touch on touchy subjects of attempted rape, drinking, smoking and sex, but I feel the way the author portrayed it in the book it needed to be written to tell the story in a realistic way.  One book that I am glad to have read and wouldn’t mind re reading again.