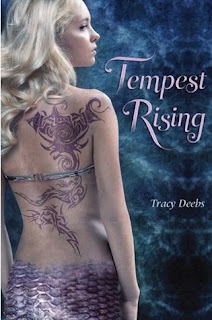 Tempest Maguire wants nothing more than to surf the killer waves near her California home; continue her steady relationship with her boyfriend, Mark; and take care of her brothers and surfer dad. But Tempest is half mermaid, and as her seventeenth birthday approaches, she will have to decide whether to remain on land or give herself to the ocean like her mother. The pull of the water becomes as insistent as her attraction to Kai, a gorgeous surfer whose uncanny abilities hint at an otherworldly identity as well. And when Tempest does finally give in to the water’s temptation and enters a fantastical underwater world, she finds that a larger destiny awaits her—and that the entire ocean’s future hangs in the balance.

Tempest Rising is a new novel by author Tracy Deebs focusing on the world of mermaids and sea creatures.  When a friend sent me this book to read,  I couldn’t wait to read it!  Just the cover alone — with all of its purple glory– captured my attention!  I am a sucker for purple, beautiful covers and something to break the cycle of vampires and werewolves.


At first, I was having a hard time enjoying this book.  It seemed to drag on for Part One.  I didn’t like Tempest that much because of the way she was treating her boyfriend Mark, acting like she didn’t like a boy fawning over her.  I thought Mark was at times a little protective, but I saw that he actually cared about Tempest.  Then we are introduced to Kai.  *swoon*  Kai was sexy, secretive, funny and sweet.  He isn’t what he seems, but we find out what he is and go with the flow.


Tempest is dealing with a lot of things in this book.  After her Mother left her family when Tempest was only eleven,  she has practically help raise her brothers and taken care of her Father.  Before her Mother left,  she left a note for each one of her children explaining that when they turn 17, they will have to make a life decision.  That decision involves staying as a human with her family on land, or becoming a mermaid in the sea.  While Tempest was torn between staying with her family or leaving them behind,  you could actually feel the struggle she was having in the decision.  Her family always new about their heritage of being half human/ half mermaid, and her Father even holds out hope that Cecily, Tempests’ Mother, will return to them some day.   When Tempest tries to rescue Kai after an attack from the sea witch,  she finds herself in the underwater kingdoms and trying to figure out her destiny.

I was thrilled when Tempest finally got to explore life under the sea and alongside Kai.  I felt her to better suited with Kai than with Mark.  After the slow dragging story in Part One,  the book really picks up speed and takes you for a fantastical ride underwater!  I loved learning about the supposed Prophecy, the different kingdoms under the sea, and I even enjoyed the sea witch as a villain.  Yes, it was a little predictable in some parts,  but the ending was a surprise.  I couldn’t believe Tempest made the decision she made after struggling so hard throughout the book with it.


I do hope there is more to this than just one book.  I am anxious to see how Moku and Rio, Tempests’ brothers, deals with their decision.  I also want to see if the author will be able to tell a tale involving her Father and maybe some of the other creatures under the sea.