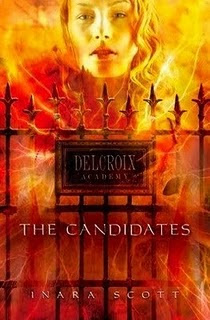 Dancia Lewis is far from popular. And that’s not just because of her average grades or her less-than-glamorous wardrobe. In fact, Dancia’s mediocrity is a welcome cover for her secret: whenever she sees a person threatening someone she cares about, things just…happen. Cars skid. Structures collapse. Usually someone gets hurt.  So Dancia does everything possible to avoid getting close to anyone, belieiving this way she can supress her powers and keep them hidden.

But when recruiters from the prestigious Delcroix Academy show up in her living room to offer her a full scholarship, Dancia’s days of living under the radar may be over. Only, Delcroix is a school for diplomats’ kids and child geniuses–not B students with uncontrollable telekinetic tendencies.  So why are they treating Dancia like she’s special? Even the hottest guy on campus seems to be going out of his way to make Dancia feel welcome.
And then there’s her mysterious new friend Jack, who can’t stay out of trouble. He suspects something dangerous is going on at the Academy and wants Dancia to help him figure out what.  But Dancia isn’t convinced. She hopes that maybe the recruiters know more about her “gift” than they’re letting on. Maybe they can help her understand how to use it…But not even Dancia could have imagined what awaits her behind the gates of Delcroix Academy.
MY THOUGHTS:
Paranormal. Magical Powers. Private School. Good vs. Evil.
Those are the base elements to this book.  I had my eye on this book for a while, and then when it was offered on the tour site, I jumped at the chance to sign up! I loved this book so much.  This one hasn’t even been released yet and I am wishing the next installment would hurry and release as well!
Dancia is a loner.  She tries to fade into the background and not be friends with anyone.  She has known she has a power, but it seems to hurt people because she can’t control it.  When the recruiters from Delcroix Academy come to her house where she lives with her Grandmother, she can’t believe they want her to attend their exclusive and private school.  Her Grandmother doesn’t have much money, Dancia doesn’t have the best grades, and she doesn’t have any special skill that they would be aware of.  When she decides to attend anyway, she feels out of place and crushing on the student recruiter, Cam.  He seems to take a special interest in her and she wants to believe that he likes her.  Then she meets Jack.  He is, in a way like her.  He comes from no money or famous family.  He has no real skills that are as obvious as the other students either.  They become friends and spend time together.
Cam is hesitant in Dancia being friends with Jack.  Cam has secrets of his own, and knows that Jack can be a danger to Dancia and everyone else.  When Jack reveals to Dancia what Cam is hiding, she forces Cam to explain things.  She can’t believe what he reveals, but all if it is confirmed by the head master of the school.
Without giving too much away, it basically boils down to Cam vs. Jack and Dancia making the decision of what to choose for her life. I felt sad for one of the boys and wished it could have turned out differently for him.  I tried cheering him on from outside the book, but the author already had her decision on the way the story would end.  A great ending that will leave you wanting more of this amazing school and people involved!
MY RATING:

4 Responses to “(ARC Review) The Candidates by Inara Scott”

Leave a Reply to Kaitlyn (Kaitlyn in Bookland) Cancel reply