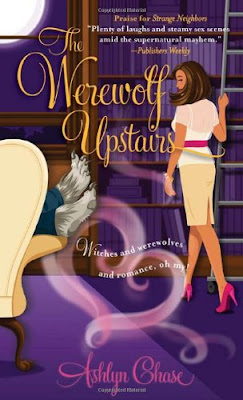 THE WEREWOLF UPSTAIRS
Author: Ashlyn Chase
Source: Publisher
*I received this book free of charge in exchange for an honest review*


Desperate for change, public defender Roz Wells decides moving into a new apartment is just what she needs to shake things up. But she’ll get more than she bargained for when she starts dating the drop dead gorgeous boy next door, who just happens to be a shape-shifter…and quite possibly a criminal. Security salesman Konrad Wolfensen has made a living staging break-ins to spook people into buying his security system, but when he’s accused of a much more serious crime, he’ll have to enlist the help of his sexy new neighbor/girlfriend to keep his cute, slightly wild rear end out of jail.

This is the second book in the Strange Neighbors series by Ashlyn Chase.  While I enjoyed the first book in the series, this one didn’t fulfill my expectations like I had hoped.  The cover is cute and eye-catching, but the book was lacking in spark.


Roz moves into Merry’s old apartment and finds herself attracted to neighbor Konrad Wolfensen.  Konrad happens to be a shape-shifter who also happens to be a security system salesman.  He gets his kicks from spooking his customers so they will buy his system.  When he is accused of theft, he turns to Roz–an attorney– to help him out.


From then on the author tries to convince you of the romantic sparks between the two.  While I enjoyed the characters, I didn’t feel any connection to the two.  I liked the dialogue, but not the actions.  This was a book that I struggled to finish, but will still give the next book a try.