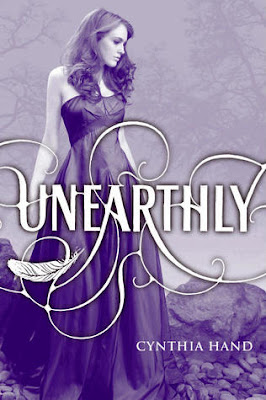 UNEARTHLY
Author: Cynthia Hand
Source: Around the World Tours
SUMMARY:
In the beginning, there’s a boy standing in the trees. . .

Clara Gardner has recently learned that she’s part angel. Having angel blood run through her veins not only makes her smarter, stronger, and faster than humans (a word, she realizes, that no longer applies to her), but it means she has a purpose, something she was put on this earth to do. Figuring out what it is, though, isn’t easy.

Her visions of a raging forest fire and an alluring stranger lead her to a new school in a new town. When she meets Christian, who turns out to be the boy of her dreams (literally), everything seems to fall into place–and out of place, at the same time. Because there’s another guy, Tucker, who appeals to Clara’s less angelic side.

As Clara tries to find her way in a world she no longer understands, she encounters unseen dangers and choices she never thought she’d have to make–between honesty and deciet, love and duty, good and evil. When the fire from her vision finally ignites, will Clara be ready to face her destiny?

MY THOUGHTS:
In her debut novel, author Cynthia Hand has created a realistic world full of angels, paranormal visions, suspense and romance.  When I first saw the reveal of the cover, I fell in love with this book.  As I read the summary, I knew I had to get my hands on a copy to read and review.  When I received this in the mail, I couldn’t wait to read it!
Clara knows that she is part human and quarter percent angel.  Her mother was half angel and her father was human.  Even though she only has a smidgen of angel in her, she still has the abilities to have visions and have a purpose.  When she starts having these visions, her mother moves Clara and her brother to Wyoming.  Since California is where Clara has lived all of her life, moving to Wyoming is not what she had expected.
When she attends school in Wyoming, she finally finds the boy from her visions.  Christian is everything a girl could want — Handsome, polite and God-Like status at school.  When Clara makes friends with Wendy though, she also finds Tucker.  Tucker is Wendy’s brother and in my opinion the better match for Clara.
As Clara tries to piece her visions together and figure out what her purpose is, she also starts to fall for Tucker even when her mother doesn’t approve.
This book had everything and more.  I loved the romance triangle, the suspense, the fun, and the secrets that are revealed in the last half of the book.  The pace was great and flowed nicely as well.  The only thing that I was not a fan of was the ending.  Some things were not wrapped up and left you wondering about it.  I understand that this book is the first in a trilogy, but some things could have been wrapped up in this book while still leaving a little suspense for the next in the series.  I still had a bunch of questions finishing this book which means others will as well.  Hopefully the next books will answer those questions.
Overall this is an outstanding read from a debut author!  One I would recommend for any reader!
Now where is the line for a signed copy from this author? I am ready to start bribing her for a copy to sit proudly amongst my favorite reads of the year!
MY RATING: