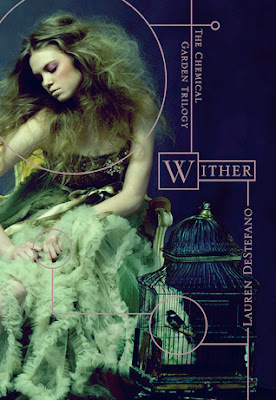 When sixteen-year-old Rhine Ellery is taken by the Gatherers to become a bride, she enters a world of wealth and privilege. Despite her husband Linden’s genuine love for her, and a tenuous trust among her sister wives, Rhine has one purpose: to escape—to find her twin brother and go home.

But Rhine has more to contend with than losing her freedom. Linden’s eccentric father is bent on finding an antidote to the genetic virus that is getting closer to taking his son, even if it means collecting corpses in order to test his experiments. With the help of Gabriel, a servant Rhine is growing dangerously attracted to, Rhine attempts to break free, in the limited time she has left.

When I received this book for review, I was excited because I was hearing so many wonderful things about it.  Yes the cover is gorgeous, and after you read the book, you realize there is symbolism in it as well. I think the main reason I hesitated in reading this book was because of the hype and the fact that I was afraid that it wouldn’t live up to all the praise it had received.  Boy, was I wrong.


While I was not a big fan of men having more than one wife–which is just selfish in my book–the reason behind the many wives is warranted I guess with the dystopia theme of the book.  When Rhine is chosen to be one of the brides for the wealthy Linden Ashby, I felt her pain and the anger she goes through knowing that she will have a hard time making it back to her twin brother.  I felt Rhine was a strong and determined character in the book.  She was focused on trying to find a way out of her prison of a marriage to get back to her twin brother who she knows is out there trying to find her.


Once Rhine finds out that Linden isn’t the one orchestrating the life she is now in, I felt the author redeemed him in my eyes.  Once I knew that,  Linden Ashby became a man in my eyes. I felt he truly came to care for Rhine and the other sister wives.  Though I didn’t agree with some of his actions towards them, I understood him a little more with his background story that he shares. This brings me to Gabriel.


Sweet and caring Gabriel was one of my favorites of the book.  I felt he was a better match for Rhine in the love department.  Even though he was only a servant, I felt him to be the better man of the two.  My only problem with Gabriel is the fact that he wasn’t around for much of the book.  I craved more of his tenderness and humor.


While some of the story is still unresolved at the end, romance and plot/story both, I feel the ending was perfect for a first book in a series.  It satisfied the reader just enough, but left me wishing for more of it.  A perfect balance like that is hard to do and the author pulled that off wonderfully. The ending was told in such a way that it is also a beautiful beginning to the next book.


I will warn readers that I feel this book should be for the older teens and adults.  It does have subjects in it such as polygamy, sex, underage pregnancy and death.  By no means is this book a cheery and happy book.  It is gritty, dark and only some parts lightness.


Overall the book was amazing.  If the subjects above are not a problem for you to read about, then I am sure you will fall in love with this book as much as I have. An amazing story of hope, life and love that will leave you thinking about what you would do as well!