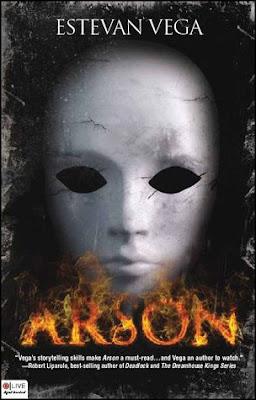 ARSON
Author: Estevan Vega
Source: Author Submission
* I received this book free of charge in exchange for an honest review*

Arson Gable feels like a freak. He can create fire. He never asked for it. He never wanted it. But he can’t shut it off. Before now, three things were true: he both loved and despised his grandmother; his life was going nowhere; and he was alone. But when a strange girl–who feels more normal behind a mask than inside her own skin–moves in next door, Arson hopes to find something he’s never had: purpose. Using what he fears most about himself, Arson must face his consuming past and confront the nightmare that is his present as he walks the fine line between boy and monster. Dark, moody, and breathtakingly relevant, Arson, the chilling chronicle of an isolated boy with unimaginable ability, is sure to ignite the hearts and minds of a new generation.

This is a book that I have seen around the book blogging community for some time now and have read wonderful things about.  When the author contacted me to review the book as well, I jumped on the chance! The cover alone had me drooling with anticipation, so the story was just icing on the cake!

Arson is a 17 year old boy who can create fire with his mind.  He has been trying to control his power even though he has no idea why or how he received it.  He has felt alone since the death of his parents until he meets Emery, a girl who wears a mask and has secrets of her own who has moved in next door.  Both Arson and Emery have problems that are real, yet with a paranormal touch added in.

Secrets will arise, romance will blossom, and suspense filled with intrigue will keep you moving in this wonderfully paced plot. Just when you think the story will come close to an end, the cliffhanger of an ending will have your head exploding in flames at the frustration of knowing you will have to wait for the next book to get more of the characters involved in this book.

A well written young adult book filled with action, love and suspense that will have you sitting at the edge of your seat! Well done!

Outstanding Book That Will Stay On My Bookshelf For Rereading! 5 STARS

3 Responses to “ARSON by Estevan Vega”