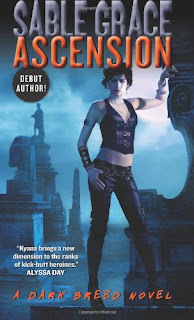 ASCENSION
A Dark Breed Novel
Author: Sable Grace
Source: Publisher
*I received this book free of charge in exchange for an honest review*

The gates of hell have opened, and one woman will stand in the crossfire as the Dark Breed—vampyre, demons, shape shifters—and mankind fight their last battle for survival.

Kyana is half Vampyre, half Lychen . . . and the last of her kind. Determined, dangerous, and damned, she has no love for the mortals who have imprisoned and misused her. But when the Order of Ancients entrusts her with a mission—to find the key that will send the Dark Breed back into Hell for eternity—Kyana has no choice but to accept.

She is furious to learn her assignment comes with an escort . . . Ryker, a demigod and fierce warrior who long ago found a way under her skin and stayed there. In a shaky alliance, they discover an ancient cult with dangerous motive and a god who seeks to destroy all others. And as Kyana begins to feel the heat that threatens to bind her to Ryker, she knows she has to resist. For it could only mean the undoing of them both .


In Ascension, we get the mixture of Urban Fantasy, Paranormal and Greek Gods all rolled into one book!  In the debut novel by Sable Grace,  action is brought with different types of creatures and Gods mixed together.


Unfortunately, I had a hard time enjoying this book.  With an overdose of paranormal creatures and too much story to be told, I couldn’t find a foothold on the book to base any feelings for the characters on.  If there wouldn’t have been so much going on with so many different creatures, I might have felt more connected to the main characters.  By the time the book started picking up and the action progressed, I had lost interest in the characters and the plot that was suppose to be interesting.


Kyana is a kick ass heroine and can fight with the best of them, but she never really captured me in the feelings department. Ryker had more of an emotional impact than Kyana.  Being the son of Ares, he was constantly struggling with being a better soldier and being better emotionally.  It created a great angst for him, but again, I still didn’t feel a connection with him.


Overall I didn’t enjoy this book that much.  As a debut book, I can understand the author trying to set up the world in the first book.  Although the author goes to great extremes in this, it dragged the book down and left the reader with too much in their heads to absorb and not enough to connect with the characters.  I will give the next book in the series a try though since the setting is now set up for this world.  Maybe in the next book it won’t be as bad since we already know the basis for the world in this story.  Maybe in the next book I can finally find that connection with main characters that I love to have!