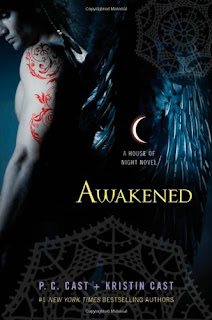 
Exonerated by the Vampyre High Council and returned to her position of High Priestess at Tulsa’s House of Night, Neferet has sworn vengeance on Zoey.  Dominion over Kalona is only one of the weapons she plans to use against Z.  But Zoey has found sanctuary on the Isle of Skye and is being groomed by Queen Sgiach to take over for her there.  Being Queen would be cool, wouldn’t it?  Why should she return to Tulsa? After losing her human consort, Heath, she will never be the same – and her relationship with her super-hot-warrior, Stark, may never be the same either…

And what about Stevie Rae and Rephaim?  The Raven Mocker refuses to be used against Stevie Rae, but what choice does he have when no one in the entire world, including Zoey, would be okay with their relationship?  Does he betray his father or his heart?

In the pulse-pounding 8th book in the bestselling House of Night series, how far will the bonds of friendship stretch and how strong are the ties that bind one girl’s heart?

As a regular  reader of this series, I have been having trouble with it.  The first couple of books were okay with just enough thrill to keep you coming back for more.  As you get to this book in the series though, you find yourself wondering if anything is ever going to get resolved and wrapped up.  Some series can go the mile in running past the 6th or so book, but those books at least have some resolution at the end of some plot points.

In the 8th book in the series, there are still several plot points that leave you hanging and in my opinion, could have been resolved by now.  I understand how the author wants to keep the reader hanging so that they will come back for more, but at some point the author needs to realize that enough is enough.  You can solve some plots and still create some intense scenes in future books.

I also had a hard time moving with the flow of this book.  The writing was the typical descriptive dialogue when reading a series to keep a new reader to the series in the know of what has happened, but for a majority of the book– nothing really happened.  I felt that it was stalled and needed a little push.  While fans of the series have found this to be the norm for the last few books,  I still wanted it to hurry up and get past this part.

While I still will continue reading this series since I have already made it this far,  I am secretly hoping that the author(s) will bring more closure on certain relationships and plots in the next book to refresh our love of the series.  While it is not a bad book,  it felt more like a filler book.