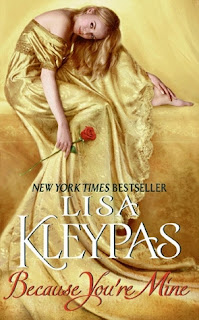 Lady Madeline Matthews would rather shame herself than sacrifice her freedom. To avoid marrying an aging, lecherous lord, she seeks out the company of Logan Scott, for a torrid affair with the notorious womanizer would surely condemn her in the eyes of good society.


In truth, Logan is an intensely private man tormented by past betrayals. Now a forward little minx, completely at sea in London’s sophisticated whirl, is disrupting his life with her vibrant charm and unspoiled beauty. But when what begins as a kiss threatens to blossom into something more rapturous and real, will Logan and Madeline have the courage to drop the masks they hide behind in the name of love?

Yes, I am on a Lisa Kleypas reading kick.  Since discovering and reading Dreaming of You, I scrounged my shelves to find any other books by this author that have been sent to me for review.  I passed other review books just to move it to the top of the pile since Historical Romance is not my usual cup of tea.  So when I found myself actually craving more from this genre based solely on my previous experience with Lisa Kleypas, I just had to read them.

I think Dreaming of You will always be my favorite Historical Romance, but Because You’re Mine is also on the top ten list for me.  This is not to say that I there weren’t some things that I didn’t like, but it was pleasurable enough to read that I would consider it as one of the better books in this genre.

Madeline was an iffy character for me.  She decides that she is not going to marry the man that her parents have chosen for her.  After seeing a photo of Logan Scott who is an actor, she decides to leave school and try to work for him at the theater.  After finding a way to get a job there,  she quickly worms her way into everyone’s heart.  She was kind of meek and mousy, but that is just her character of prim and proper among the quirky and sometimes comical theater bunch.  I did love the way she stood up to Logan when he was being an arse.  Seriously, I think that was her saving grace for me in this book.

Logan was the typical “pound my chest and do as I say” type of man in this book.  He had a hard life growing up with no title or wealth.  He worked hard to amass his fortune and his heart belongs to the theater.  Everything comes second in line when the theater is involved.

Madeline decides to throw herself of Logan to lose her purity and ruin herself to her parents.  She plans on using Logan for this scheme, but Logan is being stubborn about it.  She enlists the help of others in the hopes of winning the plan.  Along the way they fall in love.

End of part one of the book and on to part two.  When Logan finds out that Madeline was doing all of this as a plan, he kicks her to the curb so to say.  What he doesn’t expect is for their one time of love making to produce a child.  Yes, Madeline becomes pregnant.  This is where I started not to enjoy the book.

In previous chapters Logan had no problem with Madeline being betrothed to another man.  He told her that they would find a way.  But when her parents reveal this to him and she explains her plan to him, he becomes ticked off and cold to her.  He tells her to leave and never come back.  Um, hello?  You have been telling her it wouldn’t matter.  Now you are telling her to leave? Yes, she lied and you think she used you, but you couldn’t let her explain the situation first?

When Logan finds out that she is pregnant he basically tells her he will marry her and the only use she is for him is to carry his child.  He is cold, mean and an all around brute.  Madeline is patient with him and hopes to regain his trust.

Secrets of Logan’s past come into light, characters are revealed to be more than what we thought, and a romance needs to be repaired before a happily ever after will come.  A historical romance that had good points and bad points, but one that I am glad I read.  This author can write the best Historical Romance and I am so glad to have discovered her.