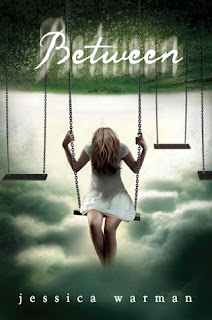 BETWEEN
Author: Jessica Warman
Source: Publisher
*I received this ARC copy free of charge in exchange for an honest review*

Elizabeth Valchar–pretty, popular, and rich–wakes up the morning after her eighteenth birthday on the yacht where she’d been celebrating with her closest friends. A persistent thumping noise has roused her. When she goes to investigate, she finds her own drowned body is hitting the side of the boat. Liz is dead.

She has no memory of what happened to her, and can only observe in horror the fallout of her death. She’s also soon joined by Alex Berg, a quiet boy from her high school who was killed by a hit-and-run driver. The two keep each other company, floating in and out of memories and trying to piece together the details of what happened to each of them.

In her regular life, Liz was a runner. It wasn’t abnormal for her to run 8-10 miles per day. But as memories from closer to her death begin to surface, Liz finds that she’d been running much more than normal, and that she’d all but stopped eating. Liz’s mother, who died when Liz was nine, had battled with anorexia as well, and those around her worried Liz was following in her mother’s footsteps. But something more sinister was consuming Liz from the inside out. . . .


These are just a few words to sum up this new book by author Jessica Warman.  When I saw the cover, I was instantly intrigued to find out more.  When I read the summary, I was interested in the story.  I wanted to know more about the characters and the experience the book was going to tell within the pages.


Liz has always been popular and pretty.  She has a great boyfriend and people who love her.  When she discovers a body in the water next to her Father’s boat, she realizes she is looking at herself dead in the water.  She doesn’t remember what has happened and can’t remember much about her life.  Then Alex appears on the scene with her.  He tells her what he knows in small portions at a time.  He tells her that she is on a journey that she needs to complete.  Liz knows she remembers Alex, but she doesn’t remember everything about him until she ventures further into the investigation of her death. Secrets will be revealed, along with self discovery of herself.


I absolutely loved the writing of this book.  I felt like I was on the journey with Alex and Liz throughout each chapter.  I cried and I cheered for Liz as she tried to figure out the puzzle that has no picture to help her complete it. I wanted to hug Alex and comfort him as well when we were shown glimpse’s of his past and family.


The ending was beautifully written as well and I couldn’t have asked for a better one.  Now that I have discovered the great writing of this new to me author, I can’t wait to see what else she has to offer to her readers!