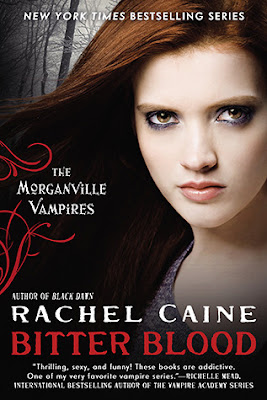 For years, the human and vampire residents of Morganville, Texas, have managed to co-exist in peace. But now that the threat to the vampires has been defeated, the human residents are learning that the gravest danger they face is the enemy within…

Thanks to the eradication of the parasitic creatures known as the draug, the vampires of Morganville have been freed of their usual constraints. With the vampires indulging their every whim, the town’s human population is determined to hold on to their lives by taking up arms. But college student Claire Danvers isn’t about to take sides, considering she has ties to both the humans and the vampires.

To make matters worse, a television show comes to Morganville looking for ghosts, just as vampire and human politics collide. Now, Claire and her friends have to figure out how to keep the peace without ending up on the nightly news… or worse.

Oh Morganville, how I have missed you. This series is addictive and never fails at nonstop action and adventure. Please forgive me for being so vague in this review, but if I were to say to much it would give away so much of the story.  We can’t have all the secrets spilled like blood in one review!

Bitter Blood is again told from multiple POV’s from all our favorite characters.  The one that excited me the most was Myrnin though! We get to glimpse into his crazy mind and the author did a wonderful job of letting the reader understand what he goes through each day.  Myrnin also knows that Morganville is changing.  It is  finally coming down to a war between the humans and the vampires.  Sides will need to be chosen and our loyal group of four will find themselves put right in the middle of it.  Previous evil villains will reemerge and try to play the game of chess with lives of all.  Some you won’t expect, others you will.  One character will finally die, but I won’t tell you which one or how.

We will also see the marriage between a vampire and human –Eve and Michael– come to a major play for this book.  Amelie didn’t want this marriage to take place for a reason and it will be revealed why in this book.  Shane and Claire will also have their own relationship struggle that will change their outcome as well.

Can I just say that what the author gave me as a reader in the last half of the book, was some of the best she has written yet.  She wasn’t afraid to take the road the fans will hate, but in time I believe it is for the best.  There has been build up for this scene throughout the last few books — if not all — that finally comes to a climax. I think I was just as flabbergasted and shocked as the characters.

After thirteen installments in the Morganville story, it is great to know that the author can keep shocking me and keeping the story line interesting.  For fans of Morganville, do not miss this one.  Things are changing and evolving with each new chapter!

–I lifted one foot from the brackish water, and the bunny slippers were soaked and drooped pathetically.  Even the fangs seemed robbed of any charm.
“Don’t worry,” I told it.  “Someone will pay for your suffering. Heavily.  With screaming.”
I felt I should repeat it for the other slipper, in case there should be any bad feelings between the two.  One should never create tension between ones’s footwear.
–POV is Myrnin, page 221

Outstanding book that will stay on my bookshelf for rereading!
BUY FROM AMAZON
*I received this book free of charge from the publisher in exchange for an honest review*