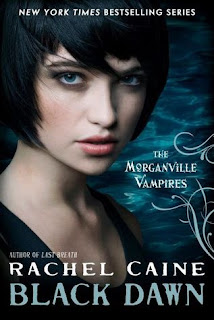 In Last Breath, the rain brought a new and dire threat to Morganville and its vampires… their ancient enemies, the draug. Now, the vampires are fighting a losing war, and it will fall to the residents of the Glass House: Michael, Eve, Shane and Claire, to take the fight to an enemy who threatens to destroy the town, forever.

MY THOUGHTS:
*contains spoilers if you haven’t read the previous books*
After the ending we were left with in Last Breath, the fate of Morganville was left in shambles.  The Founder has been bitten and is now near death.  The Draug are getting stronger and much bolder in their attacks against humans and vampires.  When you start the first page of Black Dawn, we are picking up where the previous book left off.  Now the town is dealing with the aftermath of the rescue mission and it is not going well.
Told from multiple point of views again, the reader gets to glimpse inside their favorite Morganville characters. (except Myrnin — and I am very disappointed we haven’t got to read from his POV yet!)  Together, Shane, Claire, Eve, Michael and the vampires must find a way to save their Founder and bring down the Draug once and for all.  What the reader gets is romance, drama, death and the beginning to a new chapter in Morganville with a set of new rules to come.  Yes, we even get a cliffhanger ending that makes you want the next book right now.
I cried with the death of a great character again,  — oh, how Ms. Caine loves to hurt the readers this way — and the painful aftermath of a Draug capture to another beloved character.  It was heart wrenching, nail biting, and oh so good.  Of course, Morganville wouldn’t be the same without Myrnin.  I admit it.  Myrnin is my favorite character by far because he is so crazy he is smart.  I love how Myrnin can be indifferent one moment, and caring the next with Claire.  I seriously want a Myrnin of my own to work with.
While Black Dawn still didn’t surpass Last Breath or Carpe Corpus as my favorite in the series, it is by far the best in plot.  It brings everything to the front and makes the reader wonder what will happen now.  If you haven’t bought your copy of Black Dawn yet, you are seriously missing out on one of the best books in the series.  I can’t wait for what is to come for Morganville next.
MY RATING:

Outstanding book that will stay on my bookshelf for rereading!
*I received this book free of charge in exchange for an honest review*