Today on My Overstuffed Bookshelf, I have the great pleasure of having author Holly Schindler stop by for a guest post.  Holly is the author of A Blue So Dark and her newly released novel Playing Hurt.  So I am going to hand over the post to Holly and lets give her a warm welcome! 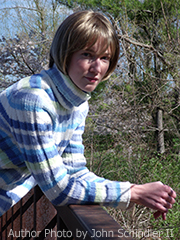 A Day In The Life Of A Writer
In all honesty, for the outside observer, it probably looks a bit like watching paint dry.  Writers really do spend inordinate amounts of time with our fingers dancing over keyboards.
But the thing is, for a writer, it’s the most exciting life possible.  In all honesty, I believe that writing a novel is just like an extended performance.  There’s this enormous burst of nervous energy associated with starting a novel.  You wonder, “How am I going to pull this off?”—just like you would if you were on a stage.  And that energy carries you through your project…
I know all writers have different daily word count goals, but I’d say I average 3,000 words each day—That takes into account days when I might not write as much on a project (because I’m in the midst of working up posts for a blog tour, or am talking to my agent, etc.), and days when I push myself away from the Internet and get about 5,000 + words down on my project.
There’s a thrill associated with finishing a project—a real adrenaline rush.  It’s absolutely addicting, actually!
And I think that’s why we all keep coming back to the novel, as writers—though it might LOOK unexciting, inside, we’re just bursting with emotions—the emotions of our characters as we depict their situations, and the emotions of being in the midst of an extended performance. 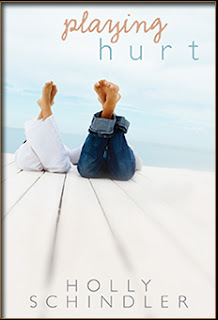 PLAYING HURT
Star basketball player Chelsea “Nitro” Keyes had the promise of a full ride to college—and everyone’s admiration in her hometown.  But everything changed senior year, when she took a horrible fall during a game. Now a metal plate holds her together and she feels like a stranger in her own family.
As a graduation present, Chelsea’s dad springs for a three-week summer “boot camp” program at a northern Minnesota lake resort.  There, she’s immediately drawn to her trainer, Clint, a nineteen-year-old ex-hockey player who’s haunted by his own traumatic past.  As they grow close, Chelsea is torn between her feelings for Clint and her loyalty to her devoted boyfriend back home.  Will an unexpected romance just end up causing Chelsea and Clint more pain—or finally heal their heartbreak? 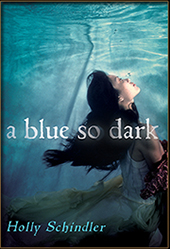 A BLUE SO DARK
Fifteen-year-old Aura Ambrose has been hiding a secret. Her mother, a talented artist and art teacher, is slowly being consumed by schizophrenia, and Aura has been her sole caretaker ever since Aura’s dad left them. Convinced that “creative” equals crazy, Aura shuns her own artistic talent. But as her mother sinks deeper into the darkness of mental illness, the hunger for a creative outlet draws Aura toward the depths of her imagination. Just as desperation threatens to swallow her whole, Aura discovers that art, love, and family are profoundly linked—and together may offer an escape from her fears.
————————————————————
My review of Playing Hurt: HERE
Author Blog: HERE
Author Website: HERE
Author on Twitter: HERE
Author on GoodReads: HERE