Today on My Overstuffed Bookshelf, I have the pleasure of having author Tessa Adams on the blog!! Tessa agreed to share with us her thoughts on the perfect male hero.  What can be better than talking about what we enjoy in the perfect male? So sit back, relax and enjoy the fun!  There might even be a surprise for you at the end! Take it away Tessa! 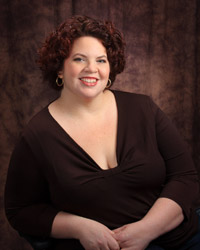 First off, I want to say how excited I am to be here today.  I love this blog and it’s a thrill to get a chance to guest here.  Plus, when Amy gave me my topic, I knew it was a match made in heaven.  She asked me to write about how I see the perfect male hero and well, let’s just say that’s a topic I’ve spent a lot of time thinking about, LOL 😉  And to sum up my feelings on this topic, I’d have to go with the famous quote from Lady Caroline Lamb in reference to George Gordon Lord Byron.  “Mad, bad and dangerous to know.”


It’s probably been fifteen or twenty years since I first heard that quote Byron and it still has the power to send shivers up my spine.  But then, anyone who knows me will tell you that I love bad boys.  Dark, twisted, angst-ridden, vaguely psychotic—bring them on.  I love to read about these heroes and love, even more, to write about them.


But what is it about bad boys that makes them so interesting to read about?  To study? To love?

I once heard a presentation by thriller writer, Jeff Abbott, where he commented that the villain is the hero of his own story.  When I heard that, everything inside of me went aha!  Not because that was such a revelation, but because it got me thinking about my own characters—and the characters I’ve loved for years—the Gothic villain heroes, men who usually skate along the edge of right and wrong, often falling on the wrong side of the line.


Villains, as Jeff explained, do terrible things, because they believe they are entitled to something.  Or everything, depending on the villain. Very rarely do they go around thinking, I am a terrible person and I deserve to rot.  Instead, they think, I deserve this so I’m going to take it, using any means necessary.  Sound about right? And of course, a hero is also the hero of his own story.


What is so fascinating, then, about the true bad boy, the gothic villain-hero, is that this is not the case.  A villain-hero is the villain of his own story.  He believes he has done something or is something so terrible, so horrible, so awful that he is irredeemable.  And for much of the story, the reader wonders the exact same thing.  Can this man be redeemed?  Just the other day, in fact, a friend of mine read the synopsis for one of my new novels and  she said to me, “How are you going to do this?  That man is such a bastard that there is no way you can redeem him.  Eighteen months later?  Maybe eighteen years later, I’d be willing to talk to him.  And that’s iffy.”

Those are your villain-heroes.  Men who live in the shadows because they belong there or think they belong there.  They’re certainly more comfortable there.  And these are the men I love to write about—and the men that lend themselves so well to Paranormal, fantasy and futuristic romance.  Villain-heroes like Anakin Skywalker, Angel, Severus Snape, Batman, Q, Terminator 2, Edward Cullen, Zsadist, Zarek.  Quinn in my new Dragon’s Heat novel, Hidden Embers.  Kona in my first paranormal YA, Tempest Rising.


These are not your golden gods.  These are the men for whom being good is really, really difficult.  And really, really boring.  This is why so many people confuse them with villains.  Because these men don’t like being good.  And yet one of the many reasons they aren’t villains is because they have a very strong moral compass, a very rigid belief in right and wrong that is often unshakable.  Villains believe they are right—or rationalize that they are because it gets them what they want.  Villain heroes know what’s right and sometimes chose to do it and sometimes don’t, but they are very clear on what is acceptable and what isn’t.

It is this darkness in them that so often draws heroines—and romance readers— to them.  So how about you?  What do you think of the bad boy who revels in being bad?  Do you like to read those stories or do you prefer a different kind of hero?

Tracy Wolff/Tessa Adams/Tracy Deebs collects books, English degrees and lipsticks and has been known to forget where—and sometimes who—she is when immersed in a great novel. At six she wrote her first short story—something with a rainbow and a prince—and at seven she forayed into the wonderful world of girls lit with her first Judy Blume novel. By ten she’d read everything in the young adult and classics sections of her local bookstore, so in desperation her mom started her on romance novels. And from the first page of the first book, Tracy knew she’d found her life-long love.  Her first novel, A Christmas Wedding, appeared on the scene in November of 2008 and since then she has sold twenty-one novels—including Erotic Suspense and Paranormal to New American Library, Contemporary Superromance to Harlequin, and Paranormal Young Adult Romance and Contemporary Young Adult Romance to Walker Books.  Now an English professor at her local community college, Tracy lives in Austin with her husband and three sons.  She was a 2010 Rita nominee. 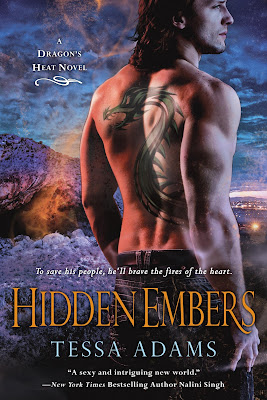 Hidden Embers—available April 5, 2011
Deep in the New Mexico desert there is a secret race on the brink of extinction—the pure-blood shapeshifters of the Dragonstar clan. And they have one last, desperate hope for survival…


Quinn Maguire is a powerful Dragonstar healer at a tragic loss, unable to cure the insidious disease killing off his people. Yet even in such dire circumstances the conservative Quinn is secretly disapproving of the alternative: Dr. Jasmine Kane, enlisted by the head of the Dragonstar clan to help abort the virus. She is a wild card.  She is an outsider. She is human.


Decked out in black leather and a tough attitude, Jasmine clashes with Quinn in more ways than one. And when destiny chooses her for his Mate, he doesn’t know whether to rejoice or rebel.  Because while Jasmine makes him burn hotter than any woman–dragon or human– ever has, their differences make a relationship impossible.
But when a rival infiltrates the clan and attacks Jasmine, Quinn becomes desperate. Jasmine is now the first human to be infected with the disease—and Quinn must do everything he can to find a cure, and save the woman he has grown to love. 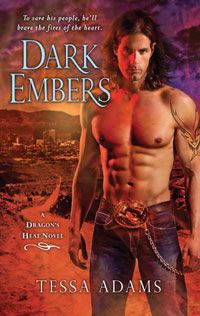 Thanks to author Tessa Adams, I have ONE copy of Dark Embers which is the first book in the series!
Plus, the author even mentioned that there possibly could be some swag thrown in to the package as well!
SUMMARY:
King Dylan MacLeod is one of the last pure-bred dragon shapeshifters in existence—and ruler of a dying race, the Dragonstar clan. It falls to him to protect his people—and their ancient magic. He has one more duty: to provide an heir.
Like all dragons, Dylan can only procreate with his destined mate—for whom he’s searched for five hundred years. His dark, rampant sexual appetite has earned him quite the reputation, all in the pursuit of his one true match.
But his search is delayed when a deadly disease sweeps through the Dragonstars, and Dylan must venture to the human world to find a cure. He tracks down renowned biochemist Phoebe Quillum, never imagining the beautiful scientist will be the mate he’s been seeking for centuries. But no sooner do they meet then Phoebe and Dylan are besieged by an obsessive, overpowering sexual desire.
Their passion turns to something truer—and they know in their souls and bodies that they’re in too deep to get out. And when Phoebe is kidnapped by Dylan’s oldest enemy, he must risk everything to reclaim the only woman he’s ever loved, or his clan will be wiped out forever.
—————————————————————–
RULES:
1. This contest is open to the USA only.
2. No need to be a follower, but I would love it if you would!
3. Leave a comment with an email address to contact you with if you win.
BE SURE TO ANSWER THE QUESTION IN RED ABOVE!
4. Contest will end on 4/2/2011.
GOOD LUCK!!!