Today on My Overstuffed Bookshelf, I have the pleasure of joining in on the blog tour for author Stephanie Draven.  Let’s give her a warm welcome and read what she has to say as a guest posting author today!

Oh Romeo, Romeo, Who Art Thou, Romeo?: Identity as a Theme in the Paranormal Romance Genre

The Westermarck effect is an observed biological phenomenon demonstrating that children raised in close proximity to one another may shy away from one another as romantic mates once they reach adulthood. This is apparently true whether or not the children are related by blood. This might be because, as the old adage goes, familiarity breeds contempt. Or it might be because part of adult sexual attraction is that our partner is, in some sense, a stranger.

If all the movie montages in romantic comedies are correct–and Hollywood would never lie–part of the pleasure in falling in love is turning a stranger into an intimate. All those romantic walks in the park, the games of strip poker, the cooking together in a kitchen that’s too small…they’re romantic encounters because they help us to know our mates, perhaps as they’ve never been known before.

People have been known to fall in love at first sight. Sometimes over the course of a weekend, or after a few weeks of dates. This seems like a remarkably short time to really get to know someone. Given the compressed nature of falling in love, a cynic might ask, how can any woman ever know her man as well as the family that raised him? How can she truly know him better than he’s ever been known before?

Quite simply, I would argue. Because on the day he falls in love with her, he isn’t the same man he was the day before. She too, is completely changed. Love is a transformative experience. An evolution of personality. At its best, it opens our minds to new experiences and ways of thinking we’ve never allowed before. At its worst, it can make us more insular and selfish. Either way, in subtle but real ways, lovers become strangers to everyone else, even as they become more transparent to the person they love. What’s more, they divulge secrets to one another–secrets they’ve hidden from others, or perhaps even from themselves.

No where is this issue of identity in romance addressed more effectively than in the genre of paranormal romance. The sense of otherness is almost immediately established. Lovers aren’t just different genders, or from different worlds; they might not even be the same species. Vampires, werewolves, animal shifters, angels, demons, and various immortals…they are fundamentally other, and that alone may account for their sexual appeal.

In spite of technology’s ability break down all social boundaries between what we would like to keep private and what the world must see, we all still wear different masks for different people. And for some of us, that can be quite isolating. Paranormal romance takes this idea and exaggerates it. Often, paranormal romance heroes and heroines have been hiding their otherness from the world. Being able to finally confess it–to be loved not for the facade they show the rest of the world, but for the very strangeness that would make them an outcast in society–those are some of the basic building blocks of true intimacy.

Another identity-based theme in paranormal romance is the acceptance of self, in order to find love with someone else. Most paranormal creatures labor under dark and angsty self-loathing. Oh, woe is me, I’m going to be beautiful, if pale, forever, and I have the desire to drink blood…

Then along comes a heroine (because let’s just admit it, it’s usually the heroine who comes to the emotional rescue) and she helps him to see who he really is. He isn’t just a brooding malcontent…he’s a fierce predator who can use his vampiric powers for good! Why, she makes him see his own inner god. And in turn, he helps acquaint her with her own inner goddess. 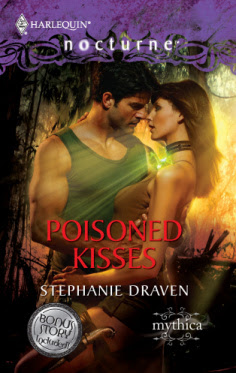 In my debut novel, Poisoned Kisses, I played with the issue of identity in an open and notorious way. My hero is a shape-shifting modern-day hydra who can wear the face of anyone who has ever hurt him. My heroine is a dark nymph of the underworld who can make mortals see whatever she wants them to see. When she meets our hero, she chooses to appear to him as a woman he once loved, and it’s a terrible deception. Throughout the book, the heroine and hero transform themselves into people of different coloring and races, all in an effort to shield their own hearts. When they finally kiss for the first time, without any masks, with their real selves exposed, it’s magic. I’m not sure I could have accomplished that in any other genre. 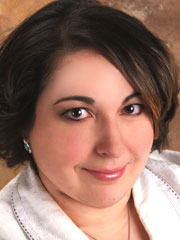 Stephanie Draven is currently a denizen of Baltimore, that city of ravens and purple night skies. She lives there with her favorite nocturnal creatures–three scheming cats and a deliciously wicked husband. And when she is not busy with dark domestic rituals, she writes her books.
Stephanie has always been a storyteller. In elementary school, she channeled Scheherazade, weaving a series of stories to charm children into sitting with her each day at the lunch table. When she was a little older, Stephanie scared all the girls at her sleepovers with ghost stories.
She should have known she was born to hold an audience in her thrall, but Stephanie resisted her writerly urges and graduated from college with a B.A. in Government. Then she went to Law School, where she learned how to convincingly tell the tallest tales of all!
A longtime lover of ancient lore, Stephanie enjoys re-imagining myths for the modern age. She doesn’t believe that true love is ever simple or without struggle so her work tends to explore the sacred within the profane, the light under the loss and the virtue hidden in vice. She counts it amongst her greatest pleasures when, from her books, her readers learn something new about the world or about themselves. Stephanie also writes historical fiction as Stephanie Dray and has a series of forthcoming novels from Berkley Books featuring Cleopatra’s daughter.
Website: http://www.stephaniedraven.com