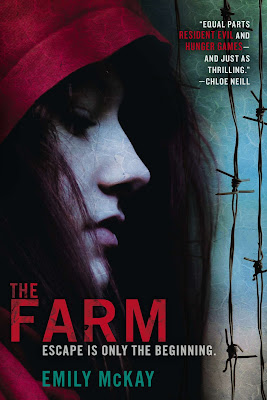 Life was different in the Before: before vampires began devouring humans in a swarm across America; before the surviving young people were rounded up and quarantined. These days, we know what those quarantines are—holding pens where human blood is turned into more food for the undead monsters, known as Ticks. Surrounded by electrical fences, most kids try to survive the Farms by turning on each other…

And when trust is a thing of the past, escape is nearly impossible.

Lily and her twin sister Mel have a plan. Though Mel can barely communicate, her autism helps her notice things no one else notices—like the portion of electrical fence that gets turned off every night. Getting across won’t be easy, but as Lily gathers what they need to escape, a familiar face appears out of nowhere, offering to help…

Carter was a schoolmate of Lily’s in the Before. Managing to evade capture until now, he has valuable knowledge of the outside world. But like everyone on the Farm, Carter has his own agenda, and he knows that behind the Ticks is an even more dangerous threat to the human race…

Lightening Round:
1) Favorite literary heroine? Lizzie Bennet
2) Vampires or Werewolves? Vampires
3) True Blood or Vampire Diaries? True Blood
4) The Notebook or Pretty Woman? Pretty Woman
5) Best way to spend Saturday night? Cuddling on the sofa with my family
6) Best way to spend Sunday morning? Eating at Café Brazil
7) How do you take your coffee? Light and Sweet … and caffeinated
8) If you had 3 things to take with you on a desert island, what would they be? My Nook, Chocolate-covered almonds and a satellite phone
9) If you won the lottery, how would you spend your money? I would buy a vintage Tesla, a diamond tiara and solar panels for all my friends.  And after that I’m pulling a J.K. Rowling and giving a ton to charity.